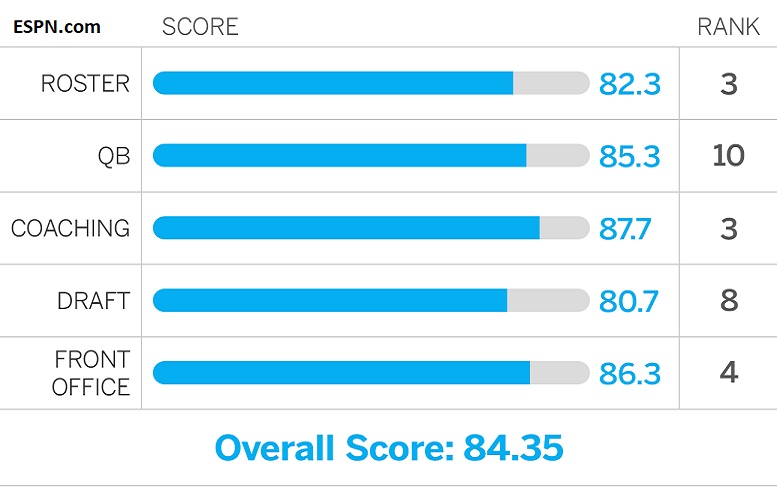 Will the Pittsburgh Steelers continue to be an ultra-competitive team over the course of the next three seasons? A panel of ESPN experts certainly believes that will be the case in a recent Insider post.

The expert panel, Louis Riddick, Mike Sando and Field Yates, were all asked to rate the rosters of all 32 NFL teams, excluding quarterbacks, in addition to rating each team’s quarterback, draft, front office and coaching. The ratings of those five categories were then weighted to produce a future ranking system.

When it comes to the Steelers future ranking, the panel results have them fifth-overall behind the New England Patriots, Seattle Seahawks, Atlanta Falcons and Green Bay Packers with a score of 84.35.

Yates explained why the Steelers are ranked where they are and as you can probably imagine, it revolves around the team’s current offense:

What has been an offensive juggernaut in recent seasons should be even better in 2017. Martavis Bryant returns, Le’Veon Bell will be healthy, JuJu Smith-Schuster was added in the draft … and, oh, Ben Roethlisberger and Antonio Brown are still in the mix. Don’t overlook the fact that all five starting offensive linemen have been with the team for four or more seasons. Continuity matters.

As for the Steelers biggest worry moving forward, Riddick unsurprisingly points to the team’s defense:

Defense, defense, defense. Particularly the secondary. The Steelers have to get better play out of a unit that allowed Tom Brady to complete 76.2 percent of his passes and average more than 9 yards per attempt in the AFC Championship Game last season. That isn’t all on the players, either. The scheme was far from perfect. You cannot play basic two- and three-deep zone coverages against Brady. That’s too easy for him. The Steelers can put up points in bunches, but if they can’t stop the pass, they will not be a serious title threat.

As for what could change for the better moving forward, Sando points to the future play of Steelers quarterback Ben Roethlisberger:

The Steelers ranked among the top 10 in every category. They could outperform their No. 10 ranking at QB if Roethlisberger plays effectively into his late 30s. Brady’s maniacal approach to fitness and health might not be for everyone, but some level of added commitment from the 35-year-old Roethlisberger is not out of the question as he ages.

The Steelers never rebuild, they just reload and with most of the main emphasis in recent drafts being placed on the defensive side of the football, it will be very disappointing if we don’t start seeing an improvement in that unit’s pass rush and coverage starting as early as the 2017 season. After a rough and inconsistent first half of the 2016 regular season, we saw the Steelers defense improve during the second half and first two games of the playoffs. Now they must find a way to contain the Patriots offense and their next opportunity to do just that will happen later during the 2017 regular season.

As for the Steelers offense remaining high power over the course of the next three seasons, a lot of that could depend on not only if Roethlisberger decides to continue playing, but what ultimately what happens to running back Le’Veon Bell and wide receiver Martavis Bryant moving forward. If Bell doesn’t sign a new contract before this year’s July 17 deadline, there’s a decent chance he might wind up playing for a different team in 2018. As for Bryant, he now needs to show he can stay out of trouble for a full season first and foremost. Additionally, his current contract is set to expire after the 2018 season.

The fact that the Steelers haven’t had a losing season since 2003 is another reason to believe the franchise will remain competitive for the next three seasons and and especially if Roethlisberger ultimately decides to play out his current contract.

As for the other three AFC North teams in ESPN’s recent future rankings, the Cincinnati Bengals are ranked 14th overall and are followed by the Baltimore Ravens at 17th and the Cleveland Browns at 32nd and last.