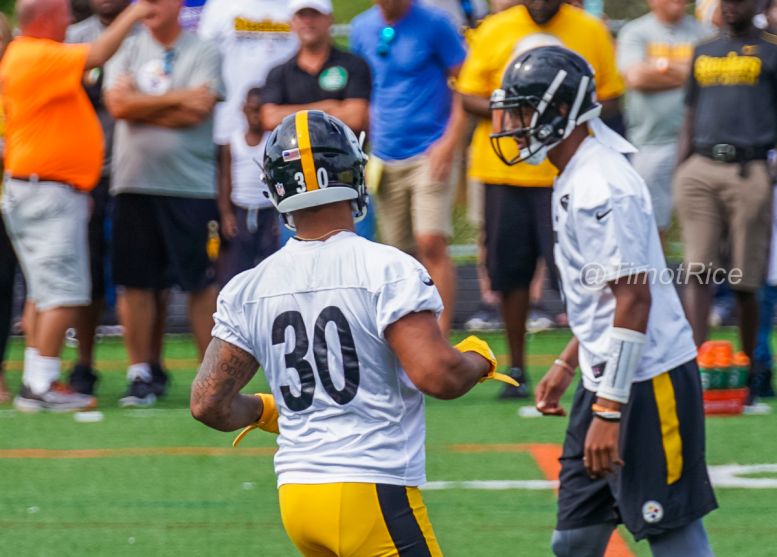 Pittsburgh Steelers rookie running back James Conner has not had the best of luck during his first offseason so far. He sustained a hamstring tweak during rookie minicamp following the draft that had him sidelined for most of the spring during OTAs. Now during the first padded practice, he suffered a shoulder injury that at least initially has him in a sling.

Not that that should be held against him. These things do happen. But it is not doing him any favors spending so much time watching practices from the sidelines rather than being right in the thick of it. And, of course, he has a golden opportunity at the moment with Le’Veon Bell not being present.

Still, he did seem to impress both his coaches and onlookers yesterday during the team’s first padded practice prior to his needing to bow out after sustaining a shoulder injury. In fact, multiple beat writers chronicled Head Coach Mike Tomlin getting in on the James Conner fandom during the backs on backers drill.

While the quotes vary, the head coach seemed to say something to the effect of “who wants a piece of 3-0”, 30 being Conner’s jersey number. By that time, he had already taken a handful of reps in the drill and impressed.

According to Aditi Kinkhabwala, offensive coordinator Todd Haley then quipped to the rookie back, “it’s awfully quiet, James”, with no defenders stepping up to the plate to take him on. You might be aware that Conner also has a bit of a defensive-minded background in his football history.

That was not the only area of the field in which he opened some eyes, but you will have no doubt gotten the scoop already in Alex Kozora’s daily practice recap, and on the podcast. He has not had the opportunity to get on the field much, but he has shown nothing so far when he has been that indicates he didn’t deserve to be taken in the draft where the Steelers got him.

He is an easy person to root for, and not simply because he overcame his battle with Hodgkin’s lymphoma. He has the highest-selling jersey, but that only interested him for about a second. He is not interested in being the football player who beat cancer. He just wants to be a great football player.

But that doesn’t mean that he is not using his unique story to help others, which is something that he takes very seriously, and is something that we have covered previously on the blog. It would be hard to argue that he didn’t wind up in the right place.

Let’s hope that he doesn’t have to miss too much time with that shoulder injury which is reportedly serious enough to get him sent back to Pittsburgh for further evaluation Monday morning. One way or another, the Steelers will need him at some point this season, and when they do, it would be ideal that he will have gotten in as much work as possible. He is already somewhat behind the eight-ball in that regard.