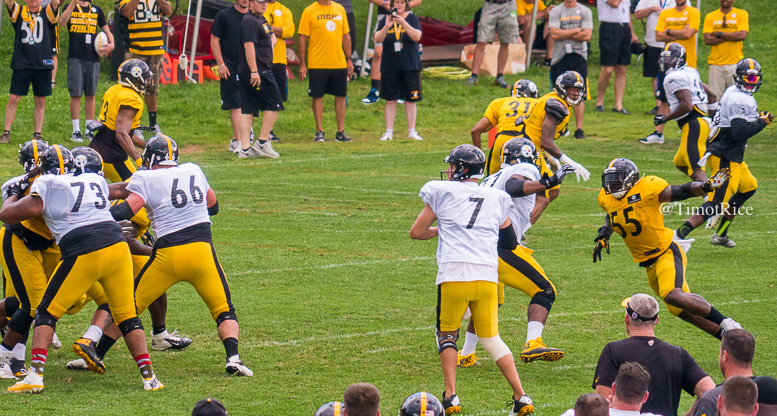 Circling back to a CBS article from last month but it offered up an interesting statistic. Ben Roethlisberger was really bad under center last season.

“He was 55 of 94 (58.5 percent) for 699 yards with four touchdowns and five interceptions outside the shotgun, for a rating of just 73.8. That’s problematic. The only guys worse than him were RG3, Bryce Petty, Cam Newton, Brock Osweiler, Jay Cutler and Goff. Roethlisberger’s rating outside the shotgun was virtually even with that of Paxton Lynch and Blake Bortles…”

The good news is that the Steelers don’t often work out under center. Less than 20% of his snaps last season came from there. Perhaps the Steelers can bring back some pistol, something offensive line coach Mike Munchak said he’d like to see. The team has used it in the past but most often when Roethlisberger was hurt and had limited mobility. Pistol, for those who don’t know, is the QB lining up in the gun but at a reduced depth than shotgun. The running back will line up behind him, like an I-Formation.

Mobility may be the issue overall, even with a healthy Big Ben. In his older age, having more trouble quickly getting away from center and reach his drop. Either way, it’s another specific area he must improve on to have a well-rounded 2017 season. That, in addition to figuring out his woes on the road.

At home, he threw 20 touchdowns to five interceptions. Compare that to him on the road where he barely threw more scores (9) than picks (8). His completion rate also dropped by more than 10%.

Should Ben be able to straighten out, or even just mildly improve, in both areas, the Steelers’ offense will reach its ceiling. A very high ceiling, for the record.