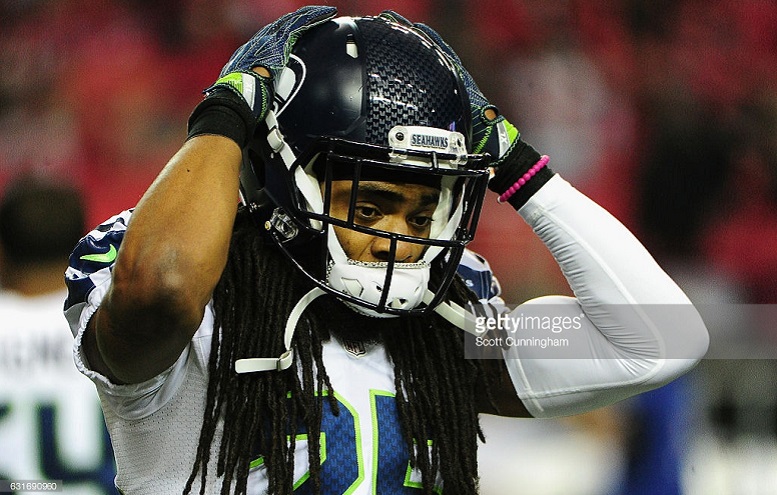 Even though he probably knows about as much as the rest of us do about the contract that Pittsburgh Steelers running back Le’Veon Bell turned down recently from the team, Seattle Seahawks cornerback Richard Sherman believes the former second-round draft pick out of Michigan State made the right decision in doing so.

Happy to see @L_Bell26 not be bullied into a fluffed up "Long Term" deal. Maybe fans will start to hold the teams accountable.

1year of guarantees is exactly what he has with the franchise tag so why would he take the deal and give them leverage and have no security?

Sherman, who for a while now has been very outspoken on several subjects pertaining to the NFL, posted Tuesday night on Twitter that it is in his belief that Bell’s decision to turn down the reported five-year offer from the Steelers that would have averaged over $12 million a season and paid the running back $30 million through the first two years and $42 through the first three was the correct one.

While several important specifics such as fully guaranteed money related to the reported deal turned by Bell aren’t yet known, the Steelers long history of only providing guaranteed money in the form of signing bonuses for non-quarterbacks more than likely held true with Bell.

Being as Steelers wide receiver Antonio Brown received a signing bonus of $19 million in his recent mega-deal, which by the way was reportedly the only guaranteed money given, odds are good that the signing bonus Bell turned down was less than that.

Even if Bell’s recently turned down contract only included a $15 or $16 million signing bonus, it’s easy to speculate he would have earned at least $18-$20 million in 2017 as long as he didn’t do anything stupid. Additionally, Bell was virtually guaranteed to see the $30 million through the first two years of the deal. Virtually guaranteed, however, is not fully guaranteed.

While the Steelers might not pay the level or percentages of guaranteed money that other teams around the league currently do, they have a long history of paying out a large majority of the higher-dollar contracts they sign players to.

While Sherman believes that Bell made the right decision to play under his $12.12 million franchise tag in 2017, there’s no guarantee right now that he’ll see a second tag in 2018 in the amount of $14.5 million. Sure, there’s a decent chance that ultimately happens and especially if Bell has a tremendous upcoming season and remains fully healthy in the process.

While Sherman infers that the Steelers tried to bully Bell into a long-term, fluffed-up contract, he is forgetting that the organization still has easy control of the running back’s future over the course of this season and next. Bell might have even done the Steelers favor by turning down the Steelers most recent offer if he ultimately plays on back-to-back franchise tags and at a high level.

Regardless of what Sherman and you and I think, Bell turning down the Steelers recent offer isn’t going to change how the organization does business contractually in the near future. Sherman, along with several other NFL players, are probably currently of the belief that the league can somehow be muscled into eventually providing fully guaranteed contracts much like their NBA counterparts currently receive.

The current CBA agreement that was ratified in 2011 expires after the 2020 season and there’s no indication that it will be extended by both sides in the meantime. If the NFLPA wants to push to fully guaranteed contracts come that time, players better be prepared to sit out a long, long time and still be prepared to eventually lose their battle.

Time will tell if Sherman is right in his belief that Bell ultimately made the right decision to turn down the Steelers offer.

In case you’re curious, the four-year, $56 million contract extension that Sherman signed with the Seahawks in 2014 only reportedly included $12.431 million in fully guaranteed money. The rest of the reported $27.569 million in guarantees at the time covered injury only at first and that amount did not become fully guaranteed until February of 2016. Perhaps he shouldn’t have allowed himself to be bullied into signing that deal.