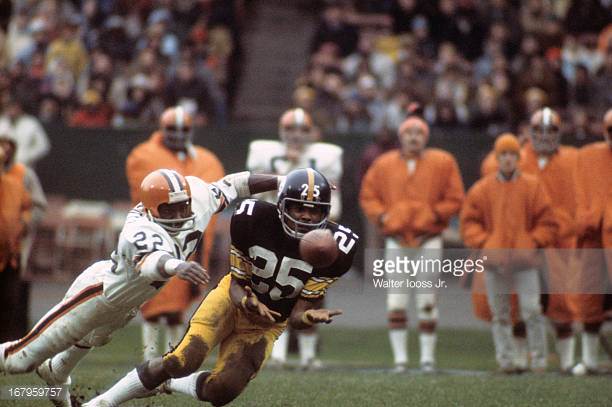 Next up, the most underrated wide receiver.

I don’t think Shanklin would be the name most people would expect me to choose here. But that’s precisely the reason I chose him.

The early 1970s wasn’t a time when the Steelers’ passing attack was prolific. Receivers weren’t going to rack up tons of yards. John Stallworth didn’t surpass 800 yards until 1979 and Lynn Swann never topped 900 yards in his entire career. The goal of a receiver in those days was to find the end zone. And find the end zone Shanklin did.

Only briefly did Shanklin get to enjoy the the good version of Terry Bradshaw. And even that’s debatable. From 70-74, Bradshaw never threw more touchdowns than interceptions and failed to complete even half his passes. By the time Bradshaw was a multi-Super Bowl winner, the Shanklin era was over.

A 2nd round pick in the 1970 draft, the same class as Bradshaw, he burst onto the scene with 30 receptions for 691 yards. In his first four years, he led the team in receptions. In 1973, he made his first and only Pro Bowl, and led the league averaging 23.7 yards per catch.

But with Stallworth and Swann turning into stars, the Steelers’ hands were tied. Talking to the Chicago Bears for about a year, the team finally relented and dealt him for two picks in 1975. The Bears GM, if you want a little trivia question, was Jim Finks, former QB of the Steelers.

“The Super Bowl is not the ultimate,” he told The Chicago Tribune after the trade. “Productivity is. Limited playing time meant limited production. I kinda like to be out there to make things happen. Chicago was one of the top cities on my list.”

Even Terrell Owens thinks Shanklin should turn down the knob on the diva-meter.

Unfortunately, only injury – not production – followed. He suffered a knee injury in 1975, missing the entire season. He attempted to come back, and played five games the following year but his knee was never fully there. One article from the Tribune referred to him having too much “fluid” in his knee to allow him on the field.

For what it’s worth, there were at least two Bears – including former Steelers’ safety Glen Edwards – who would complain the Bears’ medical staff told players their injuries weren’t as serious as they were in reality. If that’s true, maybe that was one reason why the injury ended his career.

Shanklin retired after the ’76 season, catching 168 balls for 3079 yards and 24 touchdowns in the NFL. Almost all of that came with Pittsburgh. He still ranks 16th in yards and 12th in touchdowns in Steelers’ history.

What if the Steelers passed up on Swann? Or if Bill Nunn opted against sticking around an extra day to time Stallworth on a dry track, having inside info no other team did? Maybe Shanklin would’ve remained a Steeler and flourished like the other two.

And he wouldn’t be underrated.

He’d be one of the best ever.