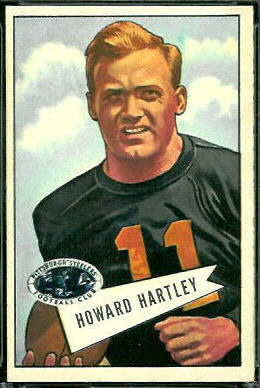 New series we’re kicking off to take us throughout the summer. We’ve written about the best players in franchise history and the most underrated on the current edition but we’ve never gone through the list of most underrated position-by-position. Not the best ones to ever wear a Pittsburgh Steelers’ uniform but ones who fans have – and shouldn’t – forget.

Finishing the defense with the most underrated safety.

That’s Howard Hartley. At least, in one respect. A trivia question you could give 99% of fans a million answers to and still fail to get the right answer. It’s Hartley who has the best games to interception ratio in franchise history. 45 games. 25 interceptions. Eat your heart out, Jack Butler.

Yes, it’s true Hartley played in a far less passing proficient era. But the late 40s, early 50s wasn’t the beginning of throwing the pigskin. Just four years after Hartley was done, Johnny Unitas and Bart Starr debuted in their league. Many still consider Johnny U the best quarterback in NFL history. Otto Graham was in the middle of a Hall of Fame career. There were good quarterbacks.

And there were good safeties. Like Hartley. He broke into the league with Washington in 1948 but ended up in Pittsburgh the next year. For three seasons, ’49 to ’51, Hartley led the Steelers in interceptions. Has that been done since? Honestly, I’m asking.

In 1950, he nearly led the entire league. Hartley picked off ten passes, finishing one behind the NFL leader that year. Only Blount has had more in a single season.

Like so many players from this time period, Hartley’s career in the NFL was short, spanning just five seasons. But oh man was it sweet. He would be named to the Steelers Legends Team to celebrate the Pre-Noll era.