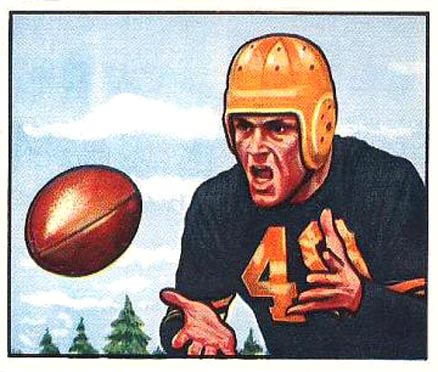 Finishing up the linebackers.

It’s been awhile in this series since we’ve shifted our focus to the pre-Noll players. It’s fair to say nearly every player from that time could be considered underrated. Or more accurately, unknown. Unless your name is Ernie Stautner, or maybe Elbie Nickel/Jack Butler – the latter for his recent Hall of Fame induction – it’s as if you didn’t exist.

For his time, Shipkey wasn’t as good as Stautner but he was within striking distance. An 8th round pick who attended both USC and UCLA, he made an immediate impact. Not just at linebacker but fullback, rushing for eight touchdowns in 1948.

Tackles weren’t a recorded stat that long ago but Shipkey was regarded as someone always around the ball. Freed up by guys like Stautner, he became a playmaker.

An excerpt from the Pittsburgh Press in 1951.

“In a season that has had more down’s than up’s for the Steclers, Jerry Shipkey has been one player the fans have appreciated. There are two reasons for this. First, he loves football and his enthusiasm for the game is catching, even to those sitting in the stands. (Sometimes, unfortunately, it doesn’t catch as far as his teammates are concerned.) Secondly, he is one heckuva football player. The 220-pound Shipkey has been such a defensive standout that he has received the cheers usually reserved for triple-threat offensive backs.

Against the Philadelphia Eagles on November 4, he intercepted a pass and carried it for the team’s only touchdown. He made or helped make at least half of the tackles. Against Green Bay the following week, Jerry made 17 tackles or assists. And Green Bay had 51 plays, 29 of them passes. One of those passes, Jerry. intercepted to set up the second Steeler touchdown. It is almost a certainty that Ship-key will be picked, as he was last year, as an All-Pro league selection on the defensive platoon.”

If Shipkey was anywhere close to 17 tackles a game, like he did against Green Bay, you can bet he was putting up gaudy numbers. Finding the ball in coverage also came natural to him. In 1949, he intercepted three and set a career high two years later, picking up six of them.

Only Jack Ham has more interceptions in a year for a Steelers’ linebacker, intercepting seven in 1972. Jack Lambert matched that number twice but Shipkey’s name is right up there. His numbers may have been even better had the Steelers – as they liked to do during that time, often to a fault – not traded Shipkey to the Chicago Bears in 1953. A shoulder injury suffered that preseason sadly ended his career.

Still, Shipkey finished with 13 interceptions. In franchise history for a linebacker, that still ranks 5th all-time. Only trailing mostly household names: Lambert, Ham, Andy Russell, and Bryan Hinkle. In his career, he made three Pro Bowls and a pair of All-Pro teams.

Good players. Bad teams. That about sums up the 1950s Pittsburgh Steelers.