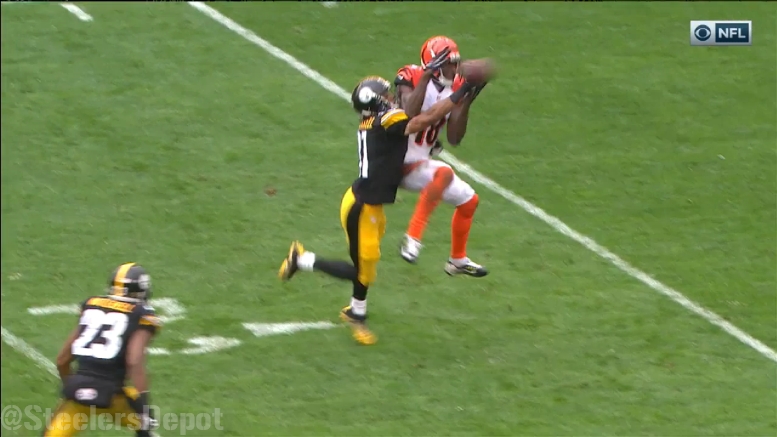 In a Monday post on Pro Football Focus, Sam Monson attempted to identify a Secret Superstar for all 32 NFL teams ahead of training camps getting underway and when it comes to the Pittsburgh Steelers, he chose cornerback Ross Cockrell.

A fourth-round pick by the Buffalo Bills in 2014, Cockrell didn’t make it in Buffalo before playing 1,953 snaps for the Steelers over the past two seasons and starting all 2016. He didn’t record an interception in 2016, but did break up 10 passes and allowed just two scores over 93 total targets including the playoffs. Cockrell has size and range, and didn’t allow a reception longer than 37 yards all season, despite facing some elite receivers.

As far Cockrell’s key stat from 2016, Monson states that the cornerback allowed just two catches for 38 yards on six targets against Cincinnati Bengals wide receiver A.J. Green in Week 2, while breaking one up. Monson also makes sure to point out in his post the fact that Cockrell’s 0.87 yards per cover snap was 15th-best in the NFL last season.

Cockrell is currently one of the Steelers most polarizing defensive players heading into 2017 when it comes to fan opinion. The biggest issue most have with him seems to be his lack of splash plays which is something he admitted during the offseason he needs to improve on as did Steelers defensive backs coach Carnell Lake a few weeks ago. Cockrell also admitted to liking to play against larger and more physical wide receivers as opposed to smaller, shiftier players and that’s probably not too surprising.

The Steelers somewhat gambled with Cockrell during the offseason in the eyes of many when they chose to only give him an original-round restricted tender instead of a second-round variety. However, the fact that a team would have had to give the Steelers a 2017 fourth-round draft pick had one signed him to an offer sheet that ultimately went unmatched was enough to prevent such a scenario from happening.

Currently, Cockrell is expected to open the 2017 regular season as a starter on the outside just as he did last season. With the Steelers expected to make a move to even more man and pattern matching concepts in 2017, it will be interesting to see how Cockrell plays within such schemes.

The Steelers did draft two cornerbacks in the first five rounds this year in Cameron Sutton and Brian Allen in addition to adding veteran Coty Sensabaugh during the free agency so it will be interesting to see if Cockrell is able to hold onto the starting job all season and thus live up to his Secret Superstar billing.