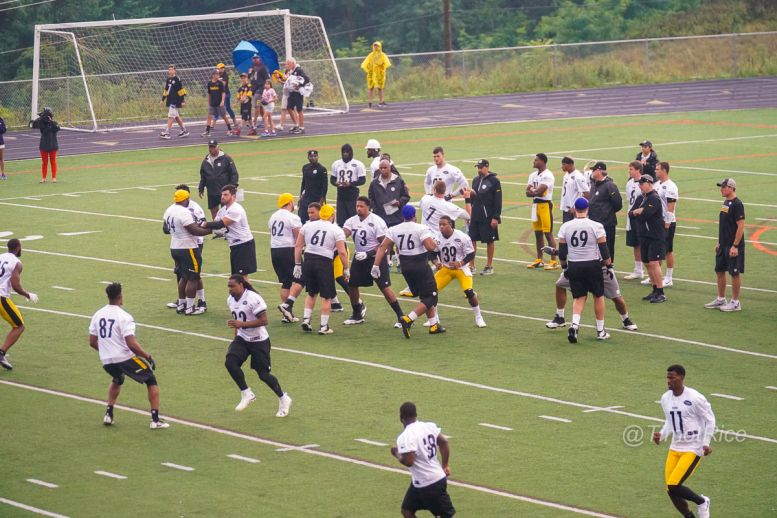 I’m still drying out from Friday’s swim at the first Pittsburgh Steelers’ practice of the 2017 preseason. Still, very glad to have driven up from Maryland. The Steelers organization proved very adaptable as did many the fans who made the trek to Latrobe. I might just go back Monday for another sampling.

It started pouring down rain a few hours before practice was scheduled to start at Saint Vincent’s College and the crew struggled to get the tarps over the grass fields. Flash flood warnings went up and a road that accesses the spectator’s parking lot was closed as the rain runoff transformed into a temporary stream. The Steelers had no choice but to close the Steeler fan day area which was becoming a soggy mess. It was also evident that practice could not be held at the college otherwise the grass fields would be churned into a mud pie by the cleats of nearly 90 behemoths.

Many people were afraid the practice would be cancelled. Some had traveled far distances. I met a guy named Ken & his wife from Utah and a father & son from Arizona. No worries, people were streaming out of the Fan day area and the word was passed around that practice was being shifted to the high school football field. That caused a little bit of confusion since the local high school play their home football games at the Latrobe Memorial Stadium where the Steelers do their annual Friday Night Under the Lights practice (that is scheduled for August 4 this year) and several people began arriving there. Unfortunately, this is a natural grass field too and although lush it would be destroyed given the heavy downpour.

The Great Latrobe Area High School has its own artificial turf field with some very nice stands. A local resident related that it was built along with the field house with contributions stemming from Arnold Palmer. The start was delayed one hour so that the team could be transported on school buses to the Arnold Palmer Field House which was next to the field. Antonio Brown was the first player on the field with the fans applauding. Maybe he was making a point to a certain missing player. A surprising number of stayed in the rain and filed into the stands.

It was very cool to sit with Steelers Depot contributors Alex Kozora and Tim Rice. Tim was snapping away with his camera taking great pictures of the team. Ryan Shazier was out their shirtless in the rain; with Eli Rogers wearing a hardhat for some reason. Alex was busy recording his observations including where people were lined up. I don’t understand how he was able to write on his soggy pad of paper. These guys are celebrities as several Steelers Depot readers approached them to thank them for their contributions though I did not see Alex give any autographs – stingy.

Here is Alex Kozora’s practice diary along with Tim Rice’s photos. They capture details of what occurred at the first practice with much better accuracy & expertise than what this average fan ever could. My view is much more impressionistic.

Although dressed in shorts & helmets; I was surprised by the sense of purpose the team seemed to have. There was more contact in the eleven on eleven drill than I expected considering the players had no pads. Everyone winced when JuJu Smith-Shuster limped off the field after coming down awkwardly on his left foot. Then breathed easier when they saw him back on the field a little while later – though it looked like there was a slight hitch to his gait to me.

James Harrison mostly worked out on his own as the rest of the team went through drills. But then he edged over near where Danny Smith was working with the long snappers. Catching their snaps for Jordan Berry. Then taking a playful swing with his leg; could he be preparing to be the emergency punter in addition to being an emergency long snapper? Please let it not be so.

Two unidentified youths worked some drills with the linebackers. Nor sure who they belonged to; but was nice to see to me. Tim Rice also pointed out Ike Taylor who was at practice in an orange poncho. He is a scouting intern but he could have been a coach the way he fit in. The unit drills were fun to watch so that you could compare how the rookies looked next to the veterans. But it was the 11 on 11 and 7 on 7 drills that got people excited. No live hitting; but the cat & mouse between receivers and secondary. Antonio Brown beating Artie Burns down the sideline with Ben Roethlisberger lofting the ball into AB’s hands. But then Artie Burns playing AB tight and preventing a reception a few series later.

Even the running plays were fun with James Conner shifting gears. May be no tackling but you could imagine him forcing a defender to miss. A near interception by Jacob Hagen on an ill-advised throw by Josh Dobbs, who had some solid passes otherwise. I saw a quarterback throwing some crisp passes and thought who was that? He looks pretty good. Alex had to remind me that Landry Jones was still in the house.

There had been some distant rumbling. Then a flash across the skyline. A long bright flash of lightning followed by a sharp crack if thunder. Without hesitation, Mike Tomlin raised his arm and pointed a finger toward the field house and the first day of practice was done.

Just like that; back in my car driving back to DC; just another Rider on the Storm.