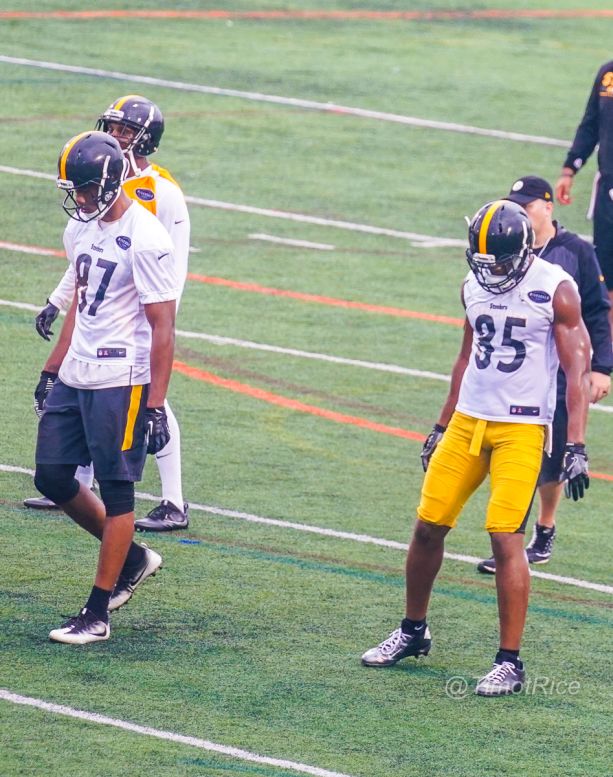 The Steelers may not have brought in the most exciting group of undrafted free agents this year that we have ever seen, but that certainly does not mean that they are without those who have the potential to make some headway with the team this year, even if it means landing a spot on the practice squad, rather than the 53-man roster.

Among the likely hopefuls for a spot on the 10-man practice squad is Phazahn Odom, the 6’8” tight end out of Fordham. Initially unsigned following the draft, the Steelers invited him to attend their rookie minicamp, and he flashed enough there that they signed him to a contract to be on their 90-man roster.

For those who have been following along all offseason, Odom is a prospect who is known more for his potential as a pass catcher than as a blocker, but the Steelers are working on him as a complete tight end rather than as a specialist.

Yesterday was his first taste of padded practices in the NFL, and Alex Kozora has yet to see anything to impress him from Odom as a blocker just yet. Working on the sled yesterday, he wrote of Odom that he “doesn’t strike up and uncoil his hips on contact, losing power immediately his first try before restarting his feet and pushing it the rest of the way. Getting into a stance and playing with leverage”.

Now, that should be very surprising for somebody who was known to be raw as a blocker to struggle the first time that he puts the pads on. But it is obvious that he has a long road ahead of him, and frankly, it would be very surprising if he were actually to be able to show enough progress to even sniff the 53-man roster this year.

But he does have the intriguing sort of potential that would be ideally suited to developing on the practice squad. He has good hands and an impressive catch radius, and he does have the frame to add more bulk. He may have to compete with Scott Orndoff for a spot on the squad though, although both could make it.