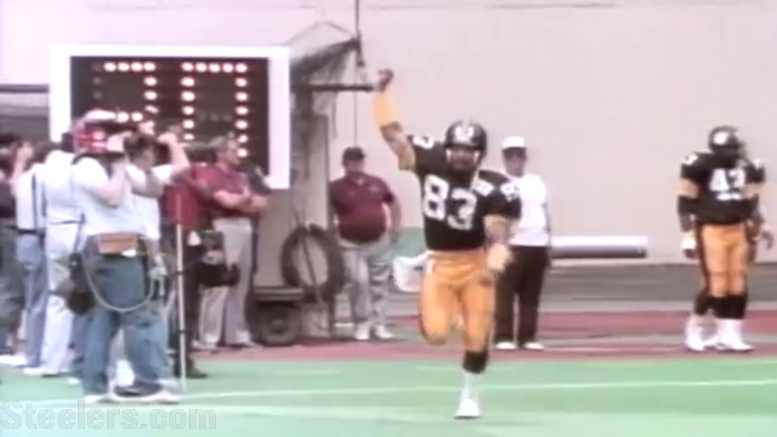 The Pittsburgh Steelers have had their fair share of talented wide receivers over the years. They already have a couple of them in the Hall of Fame, with another potentially worthy who is eligible, and they are currently watching one of their own on the current roster build up his own case for future enshrinement down the road.

But they have had some very good wide receivers over the years who get less attention because they played during less affluent era of the team. Perhaps no better example of that would be Louis Lipps, who spent eight years in Pittsburgh from 1984 through 1991.

Just consider the quarterbacks that he would have had to play with. Mark Malone and Bubby Brister were his main guys until Neil O’Donnell arrived in 1991, Lipps’ last year with the team. Those are not exactly the arms that young wide receivers grow up dreaming about catching passes from some day in the distant future.

He put up 358 receptions over those eight years for 6018 yards and 39 touchdowns, numbers that are more impressive when you put them in context. He also returned 107 punts for 1212 yards for a very respectable 11.3-yard average, with three touchdowns. He was less successful in far fewer kick return attempts.

Lipps does have the love of the Steelers faithful, however, and that is why, as Teresa Varley notes on the team’s website, he remained in Pittsburgh despite being a New Orleans native, and having played his final season in the NFL with the Saints.

“I had goose bumps as big as marbles on my arms and throughout my body”, he said about experiencing the crowd and the noise of the old Three Rivers Stadium. “It just makes you want to go out there and do something fantastic or something big just to hear that crowd go crazy and scream your name”.

He said that “the fans in the stadiums make you do things that when you see it on film, you look up at yourself and think, ‘How the heck did I do that?’ And that’s because of people in the stadium, they make you do unbelievable things”.

I can’t think of a more respectful and complimentary thing to say about a fan base, inspiring you to do greater things than you believed you could achieve. Largely a deep threat, averaging nearly 17 yards per reception for his career and four times at least 18.9 yards in a season, he surely had a number of spectacular vertical catches.

“Here in Pittsburgh you feel so attached to the fans because the fans are so attached to us”, he said in an interview for the Legends Series on the team’s website. “That’s what makes it special. It makes you want to go out there and perform, not only for you and for your coaches and your other teammates, but for the people that would do anything for you”.

“Pittsburgh is just a special place to play”.