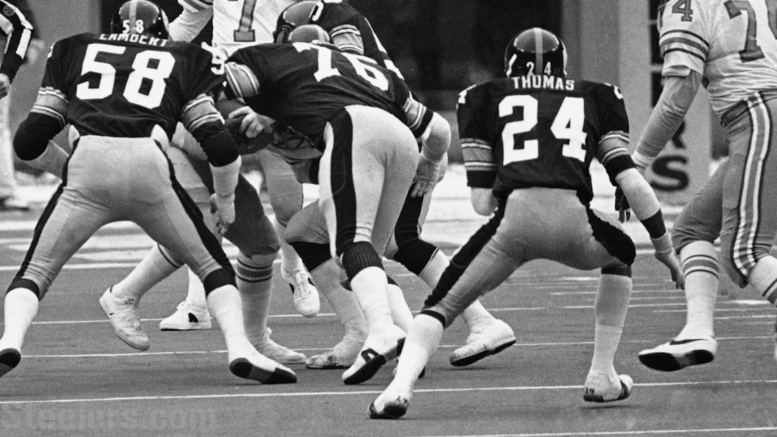 They say not all heroes wear capes. (That is what the kids are saying all the time these days, right?) Some of them end up donning multiple different attires. One of them might be said to be former Pittsburgh Steelers defensive lineman John Banaszak, who is set to be inducted into the Marine Corps Sports Hall of Fame.

Founded in 2001 and boasting a roster including Pirates legend Roberto Clemente, just 45 Marines have thus far had the honor of being inducted to date. Banaszak will be a part of the class of 2017 for the hall that “honors Marines who have excelled both on and off the playing field”, as Teresa Varley writes in an excellent article for the team’s website.

Though never formally a part of the ‘Steel Curtain’, which was specifically originally confined to the starting defensive lineup of LC Greenwood, Joe Greene, Ernie Holmes, and Dwight White, Banaszak was a key reserve for much of that time and moved into the starting lineup in the late 70s, becoming a bit of a fan favorite.

As Varley notes in her article, Banaszak’s boot camp took place in 1969 at Parris Island and served two years of active duty, though in a non-combat capacity. He was decorated with the National Defense Service Medal and the Rifle Expert Badge.

The former Steeler gave some of his recollections about his time in the Marine Corps to Varley on this occasion. “When I was active duty, it was a period in time at 18, 19 years old that I needed to focus on what I had to do in order to live the rest of my life”, he told her. “The Marine Corps gave me an awful lot of guidance as to what I needed to do to become successful. It matured me a lot”.

“I had no idea what I was getting into when I joined”, he went on. “They taught me not only to be a tough guy, but they taught me to be a smart, tough guy. That was the biggest effect it gave me. I became a kid who all of a sudden set goals for himself and started to achieve those goals”.

Banaszak served in the reserves from 1971 to 1975, when his football career began, and he said that his experiences in the Marines helped prepare him for the NFL. He said that he approached training camp the way he approached boot camp”.

“For this to occur is special”, he said of the honor of induction. “It’s special and an honor for me to represent the Steelers in this great Hall of Fame”.

It might be particularly fitting now, as the Steelers have a veteran in their starting lineup. Though not a Marine, Alejandro Villanueva is a decorated war veteran of multiple tours of duty as an Army Ranger, and that is a part of his identity that he retains in his football career, helping his fellow Rangers come out to games and things of that nature.