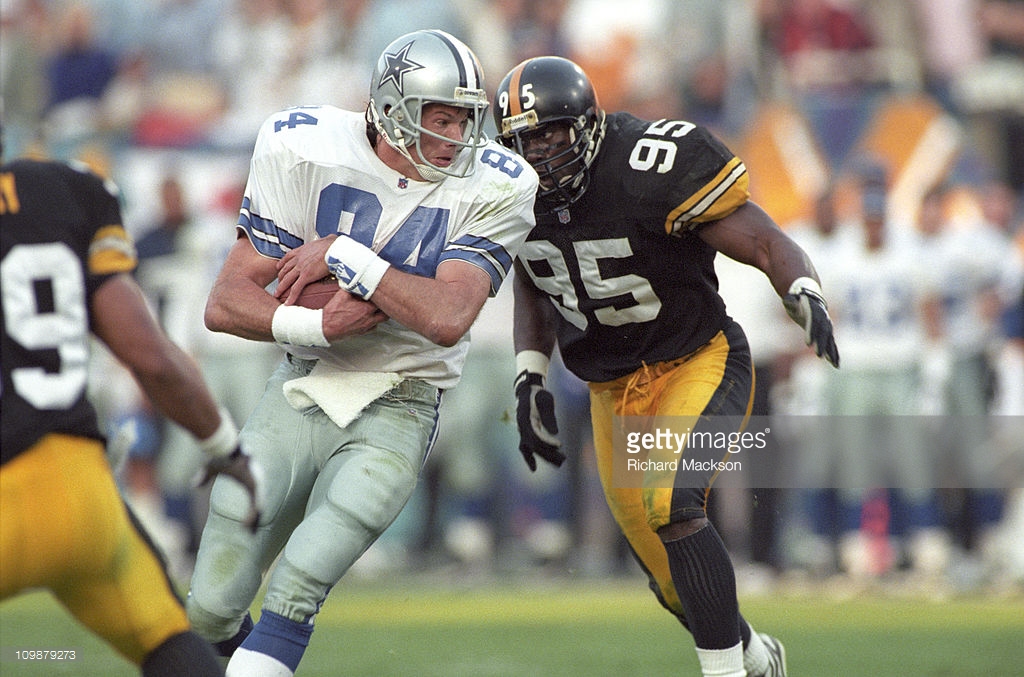 Bringing you another Pittsburgh Steelers’ interview courtesy of our good friend Ron Lippock of the Pittsburgh Sports Daily Bulletin. Today, we go a little old school, speaking with former linebacker Greg Lloyd. Lloyd discusses his career, the chip on his shoulder he came into the league with, and how the league has become too soft.

First, let’s talk about your Tae Kwon Do experience – I’m curious how you got started with that and why?

It was my first year in the league. I tore my ACL the second day of camp and I needed total reconstructive surgery on my left knee. Terry Long was taking Taekwondo and he took me with him. I wanted an edge to help me with my rehab.

Terry told me about the master at his studio and now I’ve been seeing him for twenty-plus years. I started it to make my knee stronger, but before I knew it I was doing competitions and fighting and competing, I was in competitions for a while but due to my contract I had to stop competing, Now, I don’t so it as much as I used to. Everyone wants to get to the ninth degree black belt – I’ll keep it going and we’ll see.

Did it help you on the field as well, the martial arts? How so?

Absolutely. Some teams are now using it as part of their team preparation. Offensive and defensive linemen use their hands all the time – it’s like hand-to-hand combat in the trenches. You could use it at times when you pass rush. You had to find the right spot – you don’t really think about it but when the opportunity presented itself I did it.

You are of course known for your “disposition” – even how you worked with your own teammates, How much of that was to “toughen up the young guys” and how much was that just “Greg being Greg”?

It was a little of both. You have to think about it. I was a Division Two small black college guy. I thought my stats were good enough for the first round but because no one knew about my school, I was drafted much later than some guys that weren’t as good as me from Division One schools. Even today guys can jump out of the gym and get drafted high – but it doesn’t measure heart.

When I got to the league, I’d see all those other guys and I had a chip on my shoulder. They needed to show me they were capable and better than me. There were guys drafted round one from schools like the University of Florida that made millions but were out of the league in two years. They got their millions. I needed Pro Bowls to prove myself.

So yeah, everyone who came to the league had to prove themselves to me and I wanted to show them that. And it was the funniest thing. The “I wasn’t Hired for My Disposition” shirt wasn’t my idea. I used to go to elementary schools and read to them. It was a bunch of fourth grade girls who gave me the shirt. It wasn’t something I came up with. It was in the back of my truck for a couple of days when I cut the sleeves off and put it on. I promised the girls I’d wear it. It just happened to work out for the good.

Guys like Brentson Buckner and Earl Holmes talked about how helpful you were to them and others. Do you think because of that mean disposition aura that that part of your legacy gets lost – and does it bother you?

I don’t think so. It’s funny you say that. Just a week ago Myron Bell – he was a special teams guy – he called me. Then those young guys came in – guys like Bell, Flowers, Holmes…they didn’t have the work ethic. Me, Carnell, Rod…we were the first guys on the field.

So when Myron called me (laughing) – he said ‘Greg, I want to tell you something. You an asshole! I didn’t get it then,’ he said ‘but I get it now!’ I guess as long as you get it at some point… It’s like a parent disciplining his kid. They don’t understand why, but there’s a time and a place for everything.  It’s hard for guys to understand it. With the young guys, they had to prove themselves and I wanted them to know that. Just do your job, shut up or go home. Noll taught us that. Holmes and Buckner – they wanted to be tough guys then but they weren’t yet. We’ve all been there. We had to show them they couldn’t be slacking – couldn’t be greedy. You had to do it or quit and go home.

Who helped mentor you when you got to the team?

Noll of course. Cole, Merriweather – they taught us how to work. The linebackers were always the first on the field and last to leave. Just like it is now, the linebackers led the defense. If they didn’t do well, the defense didn’t succeed.

Anyone help you the most- especially about being a professional off the field? How?

Well, Dungy was the defensive coordinator then – what better role model is there than that? He didn’t do it by telling – you just watched him.  When you’re in your twenties you don’t think about making that kind of money. You watched the veterans – guys like Shell, Stallworth, Dungy….you watched how they did it. I know I was known for saying what I wanted to say. But those guys did it all while saying less. No swearing and in the face stuff. I regret that I did that so much.

But isn’t that what drove you – helped you succeed?

Maybe it wouldn’t have worked. But with hindsight, my kids have grown and showing them how to do it the right way means more than anything. Kids need to understand – it’s just a show. Like an actor – you put on your acting gear and that’s what you do, That’s just a hat you wear though.

As a husband, father, leader in the community…you have to show them the right way to do things when you’re off the field. It was all different – a different world for me. But you have to be able to bring in everybody. A lot less intensity off the field  would have helped. I shunned a lot of people – I just didn’t want to be bothered by people. I didn’t want to shake hands with the media. I wish I had listened more to Dungy and those guys.

When you were on the field and in practice, were there any guys you hated for one reason or another or just didn’t like playing against?

If you were in a different color jersey we didn’t like you – and if you wore the same color in practice I still didn’t like you! Some of those guys that were D1 guys – they were primadonnas. The coaches would always tell us about one-to-two guys that were shit to deal with. But I wasn’t impressed. I think they may have done it to rile us up. To get us ready for game day. But when we played them – I felt they weren’t that good.

And all of those Hall of Fame guys will tell you this – you want to play the best no matter who they are. I got schooled by Anthony Munoz – probably for two years on the whole. Ogden, Roaf…guys like that were some of the best and you win some and lose some of those battles. I remember playing Barry Sanders and we just didn’t want to be a part of his highlight reels. You expect to play against the best – you never play afraid.

None you just hated though?

We had a natural hate of everyone. Our mentality was that nobody would outwork us. If someone scored a touchdown against us we’d argue with ourselves – we’d blame each other jokingly. We all understood we need to be better than that. Enough of that. I can tell you one thing – we didn’t look forward to playing Kevin Mack two times a year. He hurt everyone – numb shoulders, broken fingers…but it was worth it when we won.

Any funny moments you remember most?

Not so many really. One I do remember is when we played Cleveland and I hit Kevin Mack in the backfield – almost as he took the handoff. I hit him in his shoulder right between my shoulder and neck and my arm went numb. Maybe it was a stinger…but I was laying there and couldn’t feel anything.

The trainer came out and asked to help me stand up, and I told him he just needed help me because I thought my arm was stuck under my body. But the trainer told me I wasn’t on my arm. I rolled over and just saw my arm laying out there. It’s sort of funny – but I guess serious too now when we see guys getting injured with concussions and everything.

It’s tough. Real tough. My son was drafted in 2010 and played for three years. It didn’t work out for him – he got hurt and didn’t listen to his dad – didn’t do what he needed to do. I watch some games now and yell at the TV until my wife tells me to stop and tells me to turn it off. I don’t run to the TV to watch now – I’d rather work on my golf once a week.

What do yo think of the way the game is played today – I know you’ve been outspoken about some of the changes.

Half of the guys today – if they had to do what we did in camp – twice-a-days, Oklahoma drills – they would quit. I was an assistant coach for Tampa Bay in 2010 and got first-hand knowledge of the players. They want their fame and accolades but don’t want to work. I know they don’t want guys getting hurt and there are definitely guys that do put in the work.

But the game just got softer I think. If I can say that. I know that will upset people to say that. It just is what it is. It’s just like touch football now when you can’t even hit each other in camp.