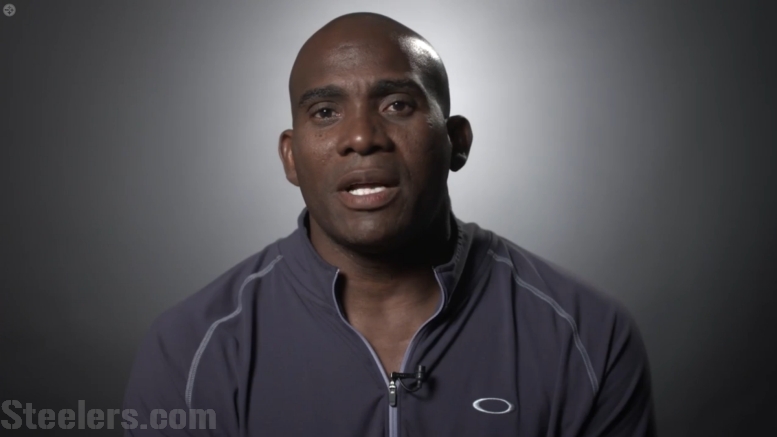 Former Pittsburgh Steelers outside linebacker Greg Lloyd may have sported one of, if not the, most famous t-shirt in the history of sports. It read, simply, “I Wasn’t Hired For My Disposition”. And it fit like a glove on him, both figuratively and literally. But there is something more to that shirt that I never knew.

It was given to him by a group of students in front of which he was asked to speak, and he promised them that he would wear their gift every day. It gradually grew into a life of its own, but at its heart, his decision to wear that shirt was largely but a kind gesture toward a group of young people that he had touched.

This was the great revelation during Lloyd’s sit-down interview with the team’s website for their Legends Series. He has had this reputation due in no small part to his iconic shirt for years, but there is more to the man, no matter his past.

“When it was over the kids wanted to present with me something and here is this t-shirt with ‘I wasn’t hired for my disposition’”, he said about the presentation that he gave. “I told the kids I was going to wear the t-shirt every day so they knew I appreciated what they did”.

Not that anybody else would understand. “People would ask me and I would smile because it was the kids and I didn’t share that. I didn’t care what people were going to say about something I wore. All I figured people cared about is what happened on Sunday”.

Of course, the shirt wasn’t altogether without honesty. As Lloyd described his approach to football, “for 60 minutes they were going to get a straight fool. That is how I tried to play”. And there were certainly plenty of times in which he lived up to the spirit of the message tucked away on his famous t-shirt.

The outside linebacker recalled a story from his rookie season that left an indelible mark on him. Drafted all the way back in 1987, Lloyd was actually part of the last class of Steelers who would have the opportunity to play under The Chief, Art Rooney. He would die in August 1988.

But during his rookie season, as he spent part of it in a hospital bed after injuring his leg, which would end his season, Rooney stopped in his room. “’How you doing Lloyd’”, he recalls the former Steelers owner asking him.

Lloyd has had a couple of high-profile incidents off the field in his personal life, moments that would seem to confirm that his ‘disposition’ transcended the football field. But at the end of the day, he sees himself differently. He has previously dabbled in coaching; one wonders if that might come to fruition again one day.