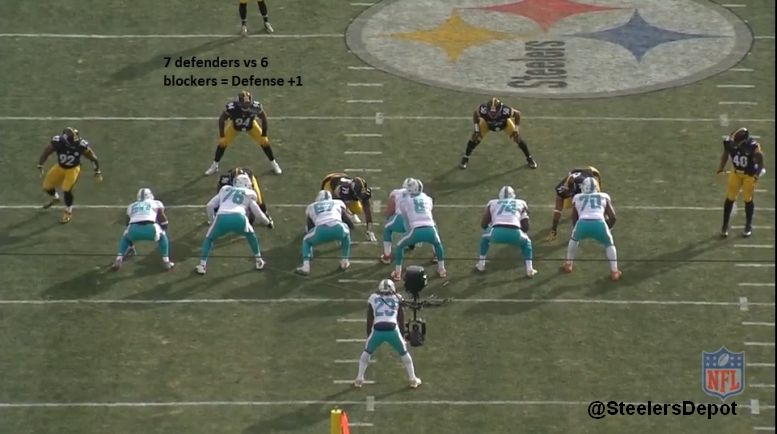 One of the biggest dilemmas, a good problem to have, to be sure, the Pittsburgh Steelers are facing is how to keep Javon Hargrave on the field more often in 2017. There’s no way Stephon Tuitt or Cam Heyward are going to come off the field at his expense. Not anymore than they need to, at least. But Hargrave has shown himself to be a capable pass rusher and someone who deserves to play more than base nose tackle snaps. Confident we’re all in agreement on that, yes?

The idea of a 3-3-5 is usually floated by fans during the offseason. But that takes away the flexibility and purpose of the 3-4 front, the ability to disguise coverages and blitzes. Not to mention the fact the Steelers haven’t shown any evidence of actually using it. Practically, it isn’t something to hang our hat on.

One idea I’ve mentioned – and will expand upon today – is having the Steelers stay in their base 3-4 defense against nickel personnel. The majority of time when offenses go to 11 personnel, three receivers, the Steelers respond with their 2-4-5 nickel. That means the nose tackle, Hargave, is removed from the field. Ergo, the problem.

What Pittsburgh did a little more often last season was stay in their base 3-4 against 11 personnel. This keeps Hargrave on the field to aid the pass rush and keep the run defense strong. It’s no secret the Steelers’ defense, like any, suffers in nickel. They allowed 3.5 YPC in base defense and 4.8 YPC in subpackages.

In nickel, it’s rare for the defense to be anything better than even. And that means if one defender loses his battle, there’s good odds the run is going to be productive. Numbers reflect that.

So let’s show two examples of how staying in base helps and the “why” behind it.

In this look, the Steelers are in their 3-4 Over front against the Ravens’ 11 personnel. Ryan Shazier is technically outside of the box, we’ll get to that alignment later in the post, but he still functions as that 7th guy. Keying the run. With Baltimore putting out 3 receivers, they only have six blockers. Their five linemen and the tight end. So the Steelers are +1. 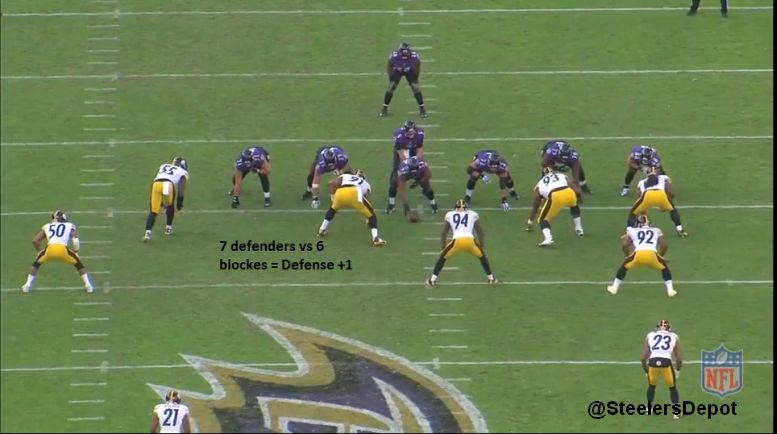 The scheme is clever, the offensive line flowing to the right with a counter back to the left (check out how hard James Harrison bites on it). To sum up the play, Ricardo Mathews works off the tight end’s block and makes the tackle with corner help as the WR tries to crack the LB. 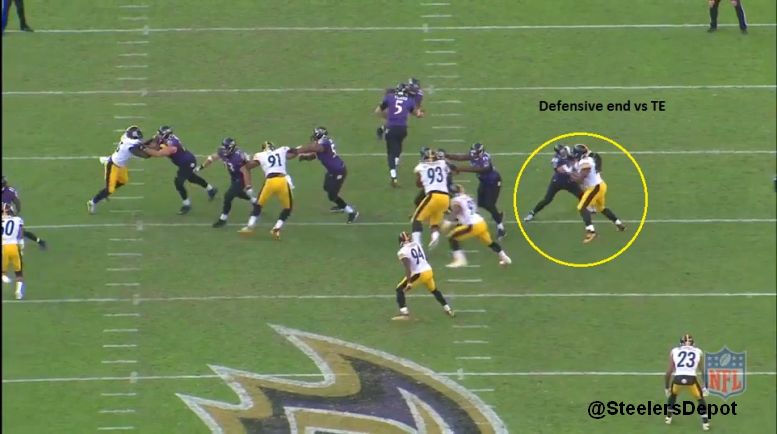 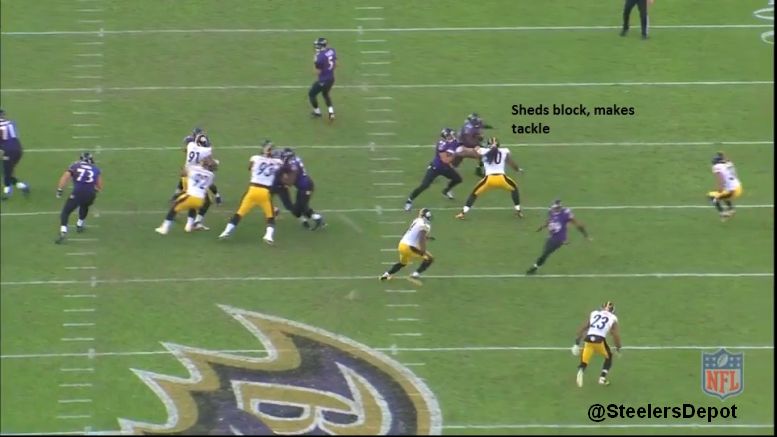 The Steelers’ success comes from having all three defensive linemen in the game. If this was the nickel, the Steelers would be aligned with a one and three tech. They wouldn’t have Mathews lined up at the five. You wouldn’t get the defensive end on the tight end, a huge mismatch for the offense and benefit of the defense, to make the play near the line of scrimmage.

Our next example comes in the Wildcard win over the Miami Dolphins. Here, the Steelers are in their traditional base 3-4 defense against the Dolphins’ 11 personnel. And again, the box count favors the Steelers’ defense at +1. Seven defenders in the box (three down linemen, four linebackers) against only six blockers.

We see another benefit of staying in base. Often, in nickel, the center is uncovered and free to work to the second level. Here, he’s covered by Hargrave and with him tilted – like Joe Greene used to do – he penetrates and blows this inside zone up. Forces the cutback. 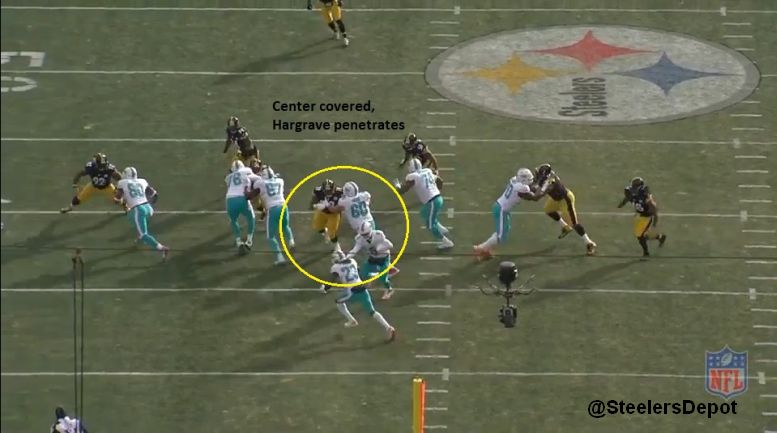 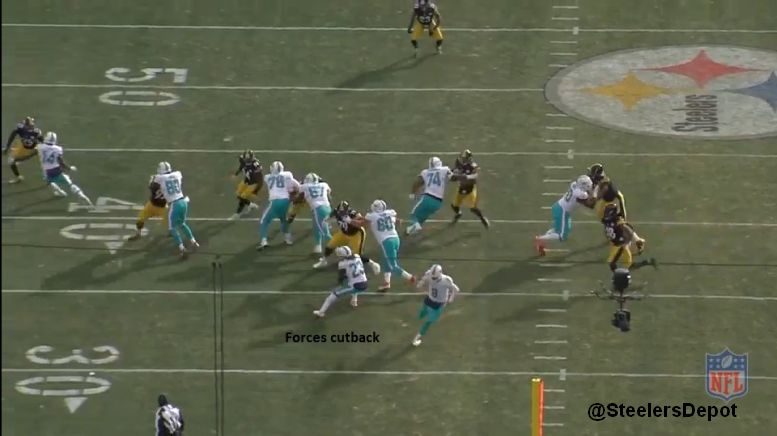 And again, the Steelers being +1 comes into play. Miami has only six to block seven, meaning they have to choose not to block one defender. They choose not to get a hat on Bud Dupree from the backside. When Jay Ajayi cuts it back, Dupree is free to crash down the line and be there on the stop, along with Shazier and Hargrave, who do well to defeat their blocks. The run goes nowhere.

An example of what happens when the center is uncovered. Just to highlight the difference. Nickel defense versus Dallas. Travis Frederick is able to set his hips and seal the tackle, create the lane for Zeke Elliott. Healthy gain of eight. 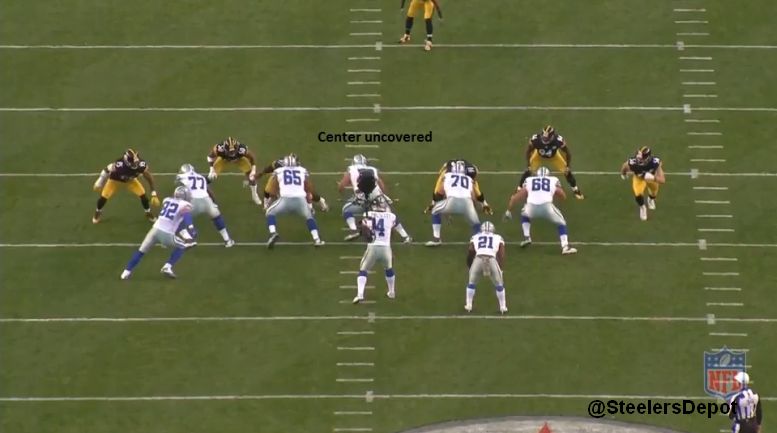 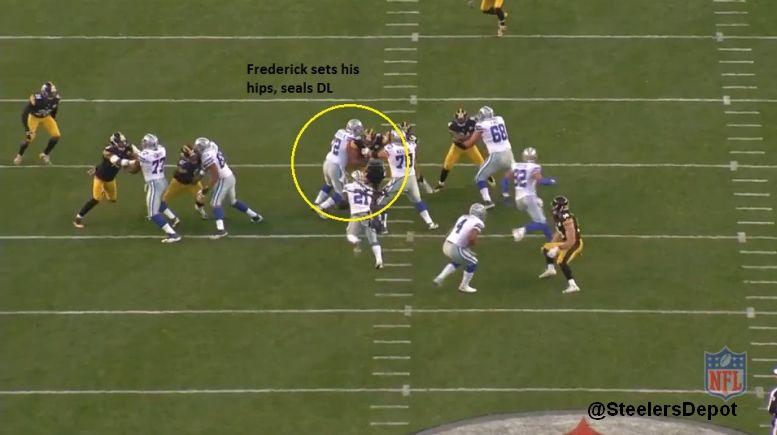 One theme between the two positive examples I showed you. Getting hats to the football, the best way to eliminate missed tackles and yards after contact. In the first example, four Steelers are there. In the second, there are three. Makes Keith Butler sleep a lot better at night. 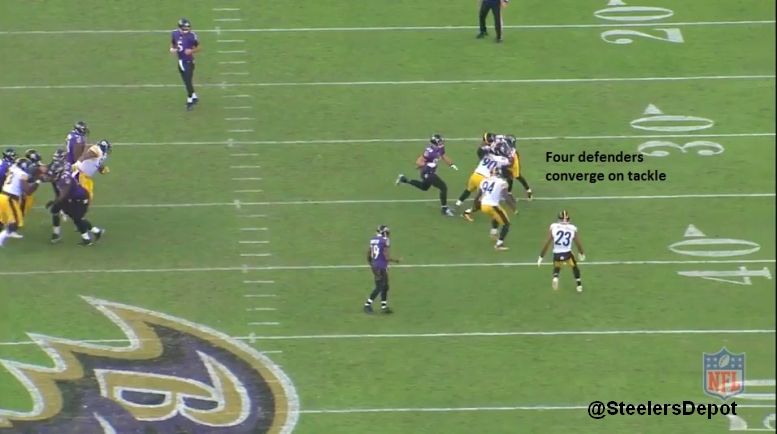 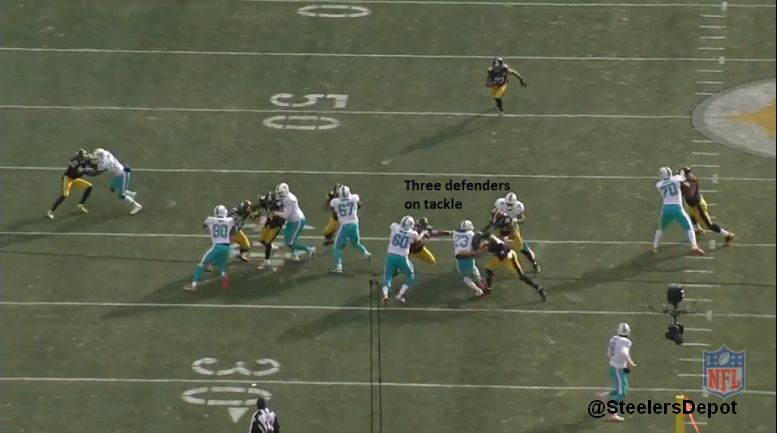 So how do the Steelers defend the pass? Being in a 3-4 does put them at a disadvantage. They’ve done it two ways.

As you saw with Shazier in the first clip, they ask the outside linebacker to split the difference between the split of the slot receiver and the EMOL (tight end or offensive tackle). Like here in these two clips. 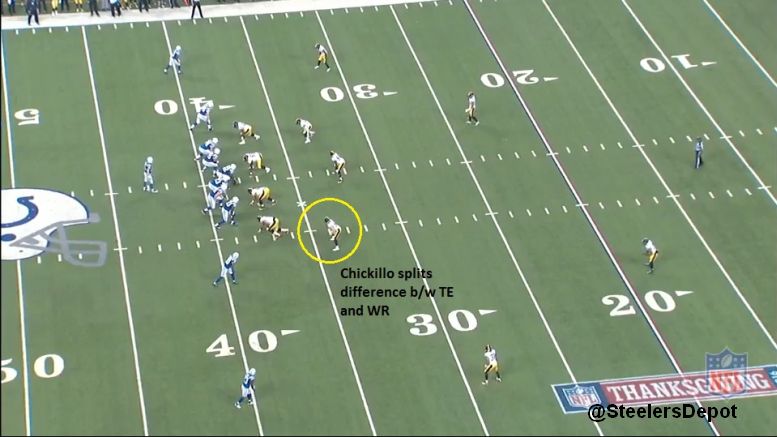 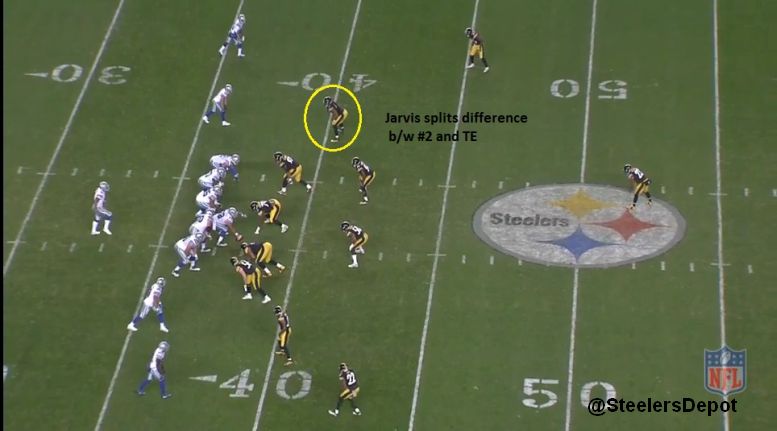 They will also ask the strong safety to rotate down over the slot. That generally limits coverage a little bit more but it’s an option too and a more viable option with a guy like Sean Davis having a cornerback background. 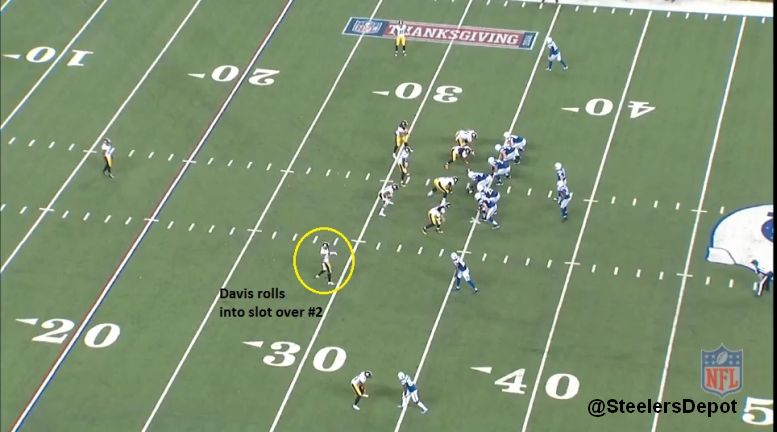 This idea isn’t something you can use all the time and to be clear, the Steelers definitely won’t. But I dig the wrinkle. Keep the versatility in coverage and blitzes while dishing a big boost to the run game and keep the talented Hargrave on the field. Win, win, win.