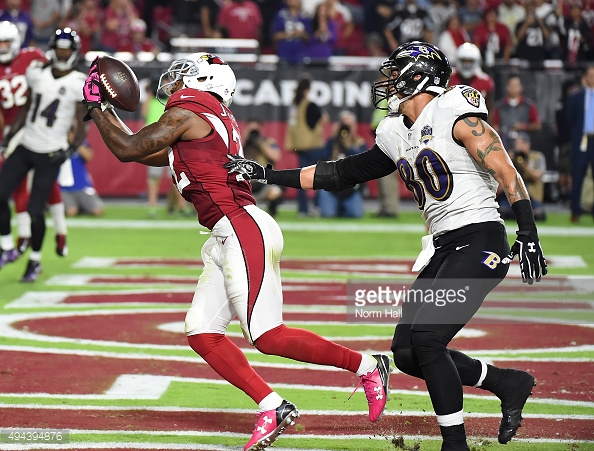 Baltimore Ravens safety Eric Weddle considers himself a bit of a student of the game. That should not be surprising when you look back at what he has accomplished over the course of his career. He saw a bit of a rejuvenation of that career last season in his first year with the Ravens, and he is expecting it to be even better in 2017.

Why? His new running mate, Tony Jefferson. A year after adding Weddle in free agency, Baltimore dipped back into the same well to bring in the former Cardinals safety who made a name for himself during the 2016 season, pairing an up-and-comer with a grizzled veteran.

Weddle told the Baltimore Sun that he had been following Jefferson during the 2016 season, and reached out to him as the young safety headed into free agency. The front office asked him what he thought of the former Cardinal, and he gave his approval.

“He’s physical, explosive and he’s only going to get better”, he said of Jefferson. “I not only look at this season but for the future as far as building this team. He can be that guy to lead this defense. From the outside looking in, when I move on, the Ravens D is still going to be good”.

One does wonder how soon that might come. Weddle is under contract for three more seasons, including this upcoming campaign, but he is already 32, so it is certainly possible that he doesn’t see through the life of that contract, playing safety at the age of 34.

“No disrespect to any of the guys I’ve played with, but it’s nice not to have to explain why I do certain things or why I’m doing this in this coverage”, Weddle said. “From day one, he already had a feel for how I play and how to work off me”.

If you recall Ryan Clark’s frequent rants about the importance of understanding how and why Troy Polamalu is doing what he is doing and how to cover for him, you might understand why what Weddle says is so important to him.

“It frees me up a lot more mentally”, he continued. “I don’t have to tell him after each play why I did this or, before the snap, let’s do this. He already knows. That is just light years ahead of most guys I’ve played with. I’ve loved every guy I’ve played with, but he’s just on another level”.

Last season, Weddle played with Lardarius Webb, who, as a veteran, was nevertheless in his first season playing safety after spending the rest of his career at cornerback. I personally thought that Webb had a solid season, and he remains on the roster this year after previously being released for salary cap purposes.

One thing is for sure, and that is that the Ravens have really bolstered the back end of their secondary over the past two seasons. It might be fair to say that they have the best safety tandem in the division before they even take a snap together.