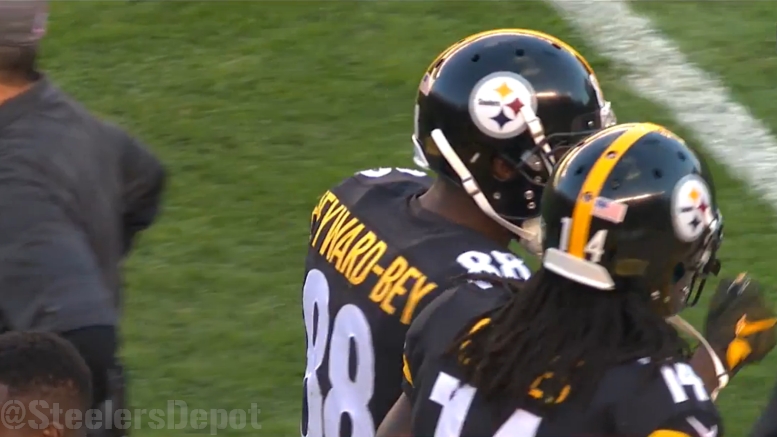 Topic: Who would be the Steelers’ third wide receiver on the outside, in the event of an injury?

I think we all know by now that the Steelers’ two starting wide receiver this season are going to be Antonio Brown and Martavis Bryant. They are easily the two most talented for those roles, and have also been the most productive in doing so.

But should something happen, who would the Steelers turn to to take up those snaps? The team had to use any number of bodies there last year while Bryant was suspended and injuries began to mount, so they would certainly like an answer. I’ll make the case for some of the more prominent candidates.

Coates already filled this role last season before he broke a couple of his fingers, and his confidence in the wake. A long time removed from that injury, and healed up from offseason groin surgery, he will be ready to rock in training camp. He’ll drop a few passes, but that just means he’s filling Bryant’s shoes, who is going to drop passes too.

There is already a push to get Smith-Schuster into the slot, but the reality is that he spent most of his college career on the outside. He has the size and the ability to win off the line of scrimmage to play outside, so if they want to hustle him onto the field into the slot, they should be ready to play him outside too. And he has gotten work everywhere.

Hunter was basically signed in free agency as Bryant insurance, so if something happens to Bryant, he would seem like a pretty obvious, bargain version of the same thing. He actually has a lot of the same strengths and weaknesses, though not in as desirable an arrangement.

We’re already starting to push it here because there will only be so many receivers on the roster, but Heyward-Bey has to be mentioned here. He ended up in the starting lineup at one point already last year, and they still value his long speed. If he is one the roster, and others fail to show up, it could fall on him again.