The beginning of training camp is vital for a few reasons. One, it is the first real chance for the fanbase to see the 2017 edition of Pittsburgh Steelers and secondly, it marks the beginning of every fan’s favorite fall soap opera. There has been no shortage of off field drama this offseason with the likes of quarterback Ben Roethlisberger’s potential retirement, the reinstatement of wide receiver Martavis Bryant and the franchise tag saga with running back Le’Veon Bell.

While those events have received their share of discussion (and possibly more) they are not what training camp is about. The first step in analyzing a team’s strengths and weaknesses, training camp is all about on field production, specifically it is a live opportunity to install elements to improve the previous edition of the team.

With an offense that looked to be on auto-pilot at times on the road last season, you can definitely bet that improving the urgency of their road offense will be on the team’s training camp agenda.

While the night and day difference in the Steelers home and away offense was easy to spot last season, perhaps what is more significant is how the Steelers’ road inconsistency stacks up with the rest of the NFL.  For this I will use Team Rankings’ Points Per Play ranking, as it is a good measure to evaluate a team’s firepower and may help point the Steelers in a direction to solve their road woes. Using the data provided, I was able to calculate the difference between each team’s home and away points per play in order to see how the Steelers stack up not only against 31 other NFL franchises but also how they held up against the league average. 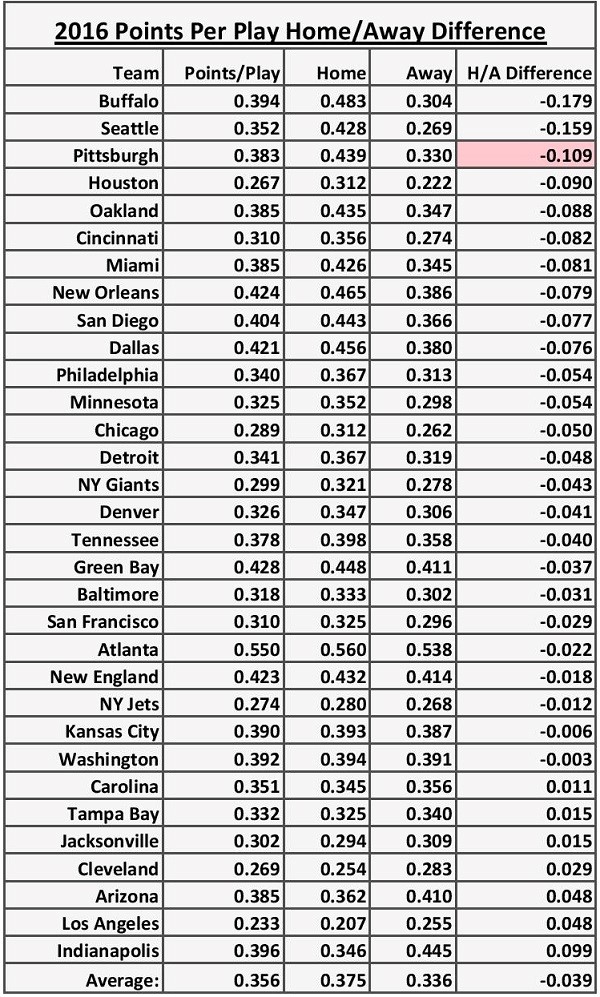 Only the Buffalo Bills and Seattle Seahawks managed to have a wider inconsistency between their home and away splits than the Steelers. It is also interesting to note that out of the final four teams involved in last season’s post season (Steelers, Atlanta Falcons, Green Bay Packers and New England Patriots), the Steelers were the only team to have a H/A difference worse than the NFL average.

So, who’s to blame for a pedestrian road offense and how does head coach Mike Tomlin fix this issue for the upcoming season?

The common thought of suspects for this crime are conservative play calling, a lack of no huddle and a lack of star power. While these suspects were able to get off with little punishment due to the team’s success last season, it is unlikely that the same performance will be tolerated this season. With a mixture of old faces and new additions on offense, the Steelers have no excuse for another offensive season where kicker Chris Boswell is single handedly responsible for all of the team’s scoring at times.

With the additions of Bryant, JuJu Smith-Schuster and Justin Hunter to an offensive big three of Roethlisberger, Bell and Antonio Brown, coordinator Todd Haley should be drooling over the infatuation of all the firepower at his disposal. These new faces will command more attention and defensive respect than last season’s counterparts Sammie Coates and Cobi Hamilton, thus leaving more opportunities for the likes of Brown and Bell.

With an extensive depth chart of receiving weapons, the Steelers offense will be able to go head to head with any opponent regardless of location.