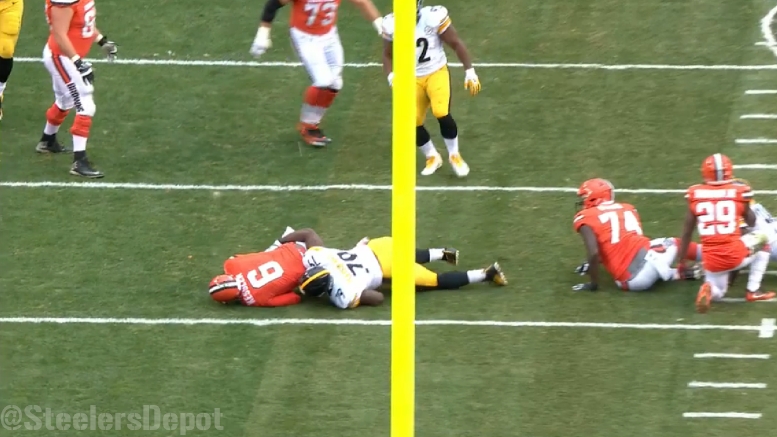 Up twenty-sixth in this series is a 2017 preview profile of defensive tackle Javon Hargrave.

Intro: Hargrave’s rookie season was a positive one, all things considered, as the third-round selection not only found himself on the field quickly, but playing quite a few snaps in addition and especially after defensive end Cameron Heyward was lost for the year with an injury. His rookie season ended with him registering 27 total tackles and two sacks. He also recovered a fumble for a touchdown during the regular season. Six of the tackles he was involved in last season resulted in zero or lost yardage.

Current Strengths: Fits mold of a modern nose tackle. Strong first step and able to penetrate, especially when lining up as a “tilted” nose in the A gap. Accomplished pass rusher already who can win in several ways. Heavy hands, powerful strike, club move is most effective but shows swim and bull. Sideline to sideline athlete who can flow versus zone schemes. Strong hands and the ability to finish plays. Unique change of direction skills. Versatile to line up as a true nose, one tech, or three tech. Will offer team snaps in nickel as well as base without any noticeable dropoff. Bought into system and shows effort chasing play from backside as well as downfield. Lack of height creates built-in leverage.

Current Weaknesses: Will need to continue to improve conditioning as team looks for more ways to get him on the field. Anchor against the run could use improvement; prone to getting washed versus double-teams and knocked off balance on down blocks. Want to see bull rush become better.

2017 Outlook: Hargrave should only keep progressing moving forward into 2017 and his total snaps played might increase a little over last year’s numbers as well if used more in sub-packages. His total tackle and sack numbers should increase just a tiny bit over his rookie numbers as long as he remains healthy. He has a bright future ahead of him in Pittsburgh based on his rookie year showing.

2016 Health Status: Missed one game due to a concussion