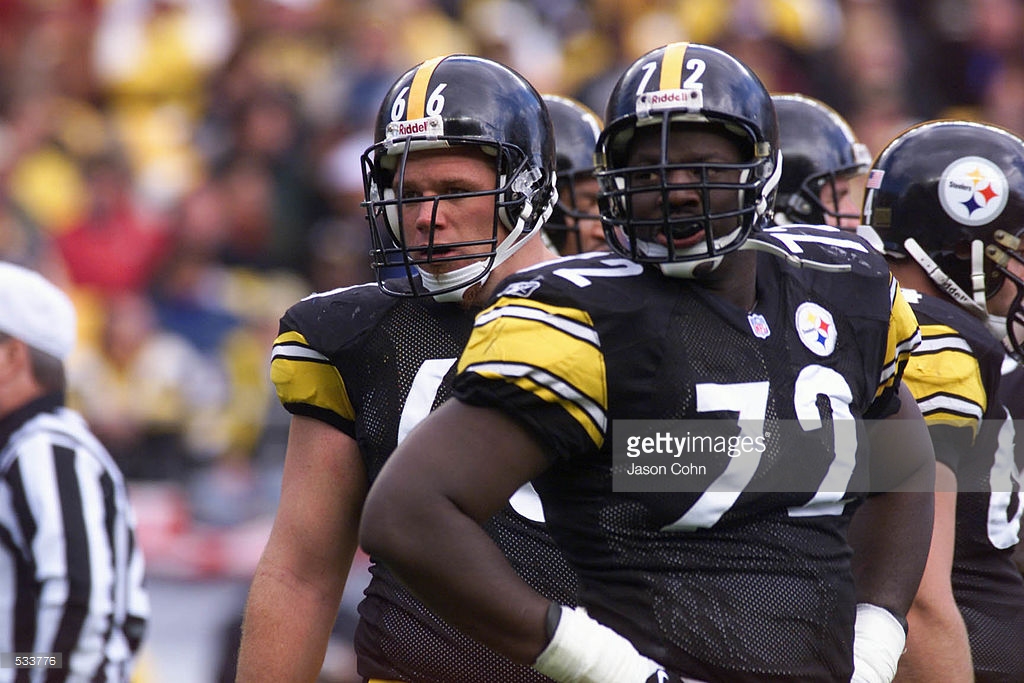 Wayne Gandy started 63 games for the Steelers, never missing a start in the four years he spent with the team. But he’s a name that has faded away into obscurity, even for a franchise that doesn’t have a Rolodex of elite left tackles. Irrelevancy can be blamed on the era when he played, 1999 to 2002. He came in right after the mid-90s Super Bowl team and left right before the mid-2000s edition.

But he was still on good teams his final two seasons, they’ve just been overshadowed. In 2001, the Steelers had the league’s best rushing attack and finished in the top ten the following year.

Even on his own team, Gandy was only the second most well-known St. Louis Ram turned Steeler. That’s where he began his career, a first round pick in 1994, before pulling a Jerome Bettis and signing with Pittsburgh in 1999. You can actually thank The Bus for landing Gandy; in this old PPG article, it says Bettis convinced him to come to the Steel City.

“I’m trying to sell him on the team, on the community and on the city,” Bettis said. “It’s important that I be here to just kind of let him know that this isn’t a deal that you [just] get paid to play, there’s a lot of things that come to being a Pittsburgh Steeler and the community’s part of it.”

It was a big contract for the times too, a four year, $14 million deal and netting a $3.85 million signing bonus. He never made a Pro Bowl but was a steady fixture on the blindside for whatever QB happened to be back there.

After his contract was up, he inked a six year, $25 million contract with the New Orleans Saints. He would get through three seasons of that deal, still starting every single game, before being shipped to the Atlanta Falcons. That began the end of his career, starting five games in 2007 before a torn ACL effectively ended his career.

At one point, Gandy started 191 of a possible 192 games. Quite an impressive streak we don’t hear much about.

Later in his NFL career, and after it, he got into the broadcasting gig. He started up The Gandy Group, which as far as I can tell, is a course he leads to help break into the industry. Gandy is dubbed “The Sports Joc.”

You can check out the site here and its many, many buzzwords that try to make things sound exciting. They just confused me. Based on their Facebook and Twitter pages, it doesn’t look like the company is active anymore.

Today, he is a color analyst for ESPN3 calling smaller school games like Georgia State vs Georgia Southern. He still has a radio show too and set up the Wayne Gandy Foundation, whose goal is “to develop, support and promote the power of sports in developing the qualities of leadership, social responsibility and academic excellence through the sponsorship of sports camps, team-building events and mentoring programs that build healthy spirits, minds and bodies of at risk teens.”

In this 2011 look-back from Steelers.com, Gandy said he still watches the Steelers from time to time. An underrated ironman and one of the better free agent signings in the pre-Colbert era.

Wayne Gandy, your blast from the past.