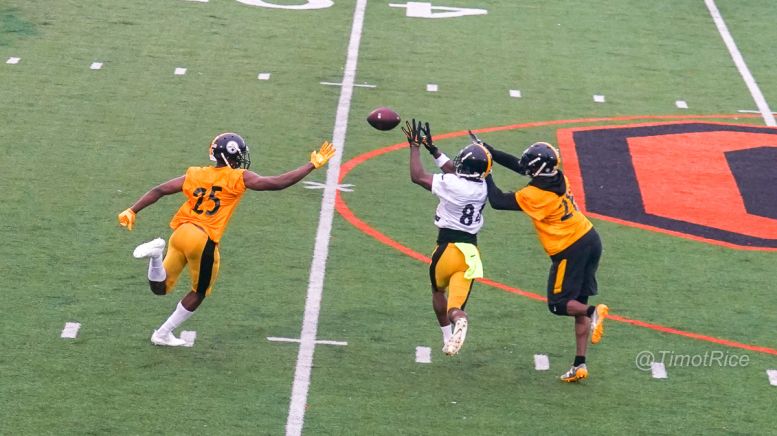 When it comes to the on-field development of second-year cornerback Artie Burns, everything so far seems to be going according to plan for the Pittsburgh Steelers in the early days of their 2017 edition of training camp. That should not be a great surprise, given how much he has learned, and played, since last season, but it does require him having put in the work.

Transgressions off the field aside, Burns has gotten off to a very encouraging start to training camp, according to the observations of virtually everybody who is attending these days. According to reports, he has been consistently shadowing All-Pro wide receiver Antonio Brown all over the field, rather than playing sides.

This has interesting implications for the future as we enter the regular season as well. I have previously weighed the question of whether or not the Steelers would attempt to match up their cornerbacks based on their opponents, which is something that they dabbled with early last season with Ross Cockrell before scaling things back to accommodate Burns as a rookie.

But now it could be Burns who is the one targeted for matching up against an opponent’s best wide receiver. Of course, the goal is for the former first-round draft pick to emerge as the Steelers’ top cornerback, potentially even a shutdown cornerback, and there is no greater test for him than to go up against Brown at every possible opportunity.

Burns told Chris Adamski that the decision to have Burns follow Brown around the field was one that was reached mutually between himself and the coaching staff. Basically, it sounds like he probably begged them to let him shadow Brown, and they relented.

Head Coach Mike Tomlin described the matchup as one that “helps cultivate the environment we’re looking for”, according to Mike Prisuta, and this is a theme that we have seen frankly since last year when they frequently stuck the rookie up against Brown.

The All-Pro wide receiver made Burns look pretty bad pretty often a year ago, but he is doing much better to hold his own entering his second season with quite a bit of experience, both on the field and in the classroom, under his belt.

I do wonder, however, if we will continue to see Burns chasing Brown around the field relentlessly whenever Martavis Bryant returns to practice. I think it would be beneficial if he were given the chance to tackle different types of wide receivers.

Cockrell has said earlier this offseason that he actually prefers to be matched up against the bigger wide receiver, such as Bryant, so perhaps that is the plan this year. He spent time shadowing A.J. Green and Brandon Marshall early during the 2016 season.