During the offseason, it’s common to see players at the same position work out. We’ve seen the linebackers link up; Ryan Shazier, Bud Dupree, and Steven Johnson have all trained down in Georgia. Jerald Hawkins has worked with former offensive linemen to pick their brain. So seeing Antonio Brown and Alejandro Villanueva on the same field together might seem a little strange. But per Brown’s Snapchat from earlier this week, that’s what happened.

Brown posted the photo mid-week, the pair working out near Pittsburgh. 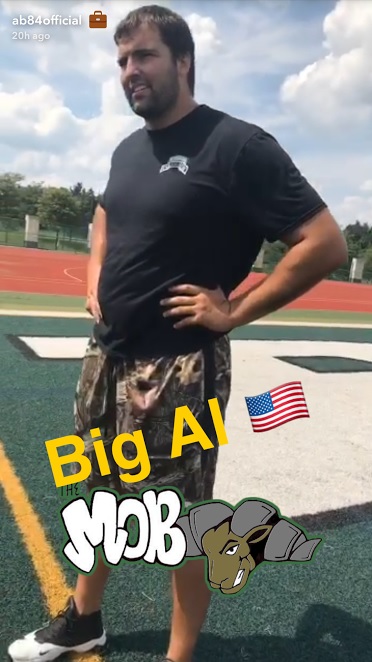 AB has taken very little time off during the offseason, par for the course with him. He’s spent time with Chris Chambers, Terrell Owens, and late night workouts with Geno Smith. But it’s clear he’s willing to train with non-receivers, though to be fair, Villanueva has a little receiving background in him. Just don’t throw fake field goals to him. Please.

It’s hard to say who has the harder work ethic. Brown, whose practice habits are unmatched, or Villanueva, who clearly had the more difficult job in the military. Even though they don’t share the same position, they’re two guys who are highly competitive and can push each other like few can.

Brown is in the prime of his career while Villanueva is entering it, continuing to ascend and become a borderline top ten left tackle in the league. Villanueva, like Brown did last year, is also looking for his pay day, currently making shekels off his scheduled ERFA tender (which has still not been signed). His agent and the team have been in talks but it’s unclear if – and when – a long-term deal would occur. Historically, the front office won’t do any extension once camp begins.

With the way Villanueva plays, and trains, a well-deserved deal will happen sooner or later.