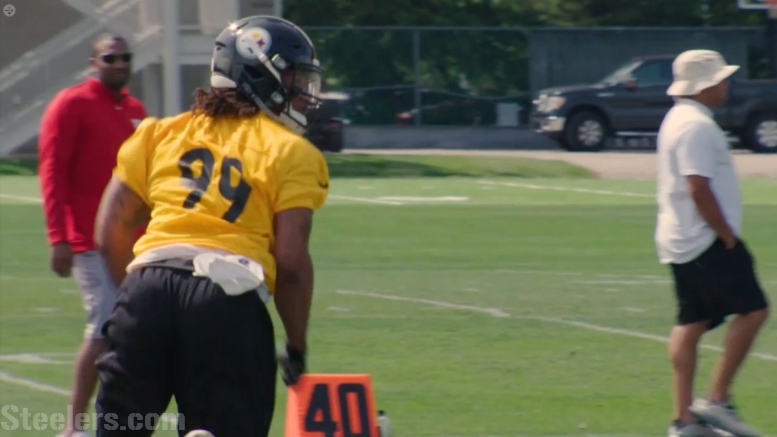 I do think that this categorization may be surprising to some here—perhaps to many—but I believe rookie seventh-round outside linebacker Keion Adams has had a positive and productive first couple of months with the team that is going to set him up to be in a good position to make the 53-man roster in August and September.

He may in practice have the worst odds of the six primary contenders at outside linebacker right now, his true competition coming down to third-year Anthony Chickillo and veteran Arthur Moats, but I expect that he is going to have ample opportunity to move up.

One of the most encouraging reports that I have read on the rookie is just how close of a relationship he has already built with fellow rookie outside linebacker T.J. Watt, their first-round draft pick. Each of them have talked about the bond they have forged, and how much they have worked  together through the transition from the college level to the pros.

Another benefit for Adams is the fact that he has a good friend on the roster in Javon Hargrave. Hargrave’s younger brother is Adams’ best friend, as the three of them all grew up together, and all essentially consider themselves brothers even though the rookie is of no blood relation.

Aside from that, I also haven’t read anything negative about what he has shown on the field. He seems to be pretty quick off the edge, for one thing. But of course it is ultimately going to come down to what he does on special teams.

Realistically, we can probably narrow it down even further to a battle between rookie and aging veteran. Chickillo is a core special teams player. Moats is not. Not anymore, at least. If Adams shows up on special teams, I don’t think the coaching staff is going to favor the older player, even if it means having four of five linebackers on the roster with two or fewer years of experience behind James Harrison.