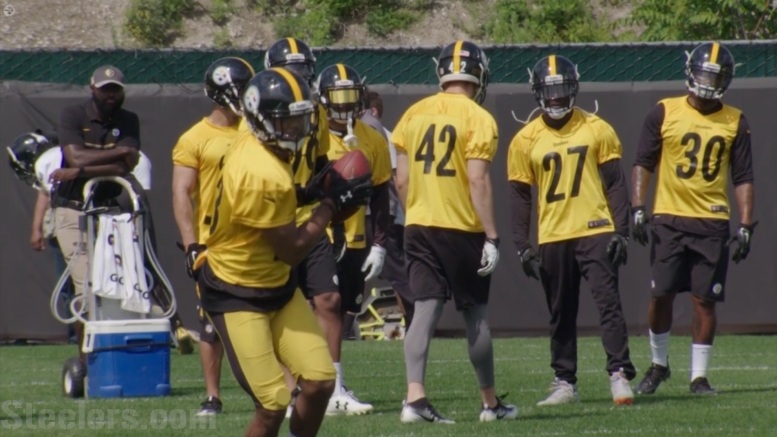 Mike Mitchell: The veteran is 30 now and entering his fourth season in Pittsburgh. While many are eager to see him replaced, he is for the time being a cornerstone of their defense and an important leader within the entire defense, and with his peers among the defensive backs in particular.

Sean Davis: It is uncommon for a rookie defender to crack the starting lineup for the Steelers—well, it used to be, anyway. But that is what Davis and two of his draft classmates did last year. He started in the nickel to being the season and then late in the year took over at safety. Major growth is expected in his second season.

Robert Golden: The sixth-year veteran, Golden, is now entering his sixth season with the Steelers. For the time being, he should be viewed as the third safety. He ran with the starters during the spring while Davis recovered from shoulder surgery.

Jordan Dangerfield: Dangerfield had been kicking around for years before he finally made the 53-man roster last year, and I’m sure he is in no hurry to relinquish his roster spot now. To his advantage is the fact that he has proven to be a solid contributor on special teams.

Jacob Hagen: Hagen is a tall safety who has spent time on the practice squad. There are those in the organization who like him, but it’s not at all clear to me that he has a realistic shot of making the roster this season.

Daimion Stafford: A veteran safety who has played the third safety role, Stafford was signed late in the offseason and will be more fully acclimated into the scheme during training camp.

Terrish Webb: A rookie undrafted free agent, Webb is very raw in some key aspects of his game. If they were deeper at safety, I would say he’s on the shortlist to be cut when they need to make a move.

Shamarko Thomas: Thomas spent four years in Pittsburgh, carving out a niche for himself as a gunner on special teams, but he never lived up to the expectations that were placed on him when they traded a third-rounder for him to draft him in the fourth round in 2013.

There is no competition to be had in the starting lineup. Mitchell and Davis are the guys there. But pretty much everything beyond that is up for grabs, and that could be particularly important this summer as the Steelers contemplate making greater use of the third safety.