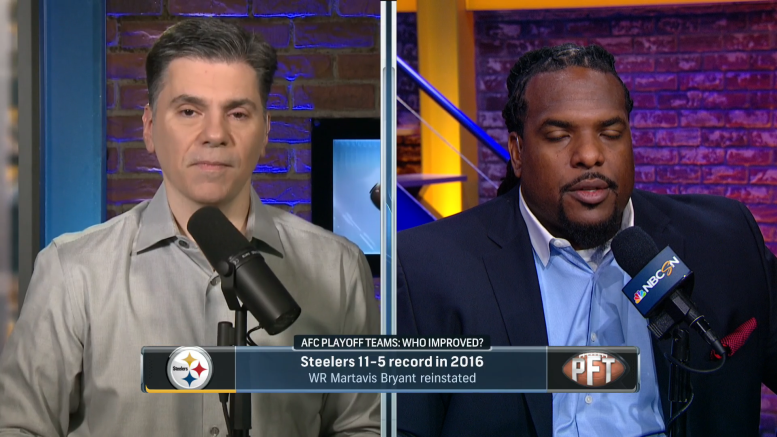 I don’t know about you, but it doesn’t matter how long it’s been since he was a member of the Pittsburgh Steelers, I’m still a fan of former right tackle—and then left guard—Willie Colon. After spending a couple of seasons with the Jets, he has since retired, and perhaps is pursuing a career in broadcasting.

The longtime starter for Pittsburgh recently appeared on Pro Football Talk Live in which he joined Mike Florio to discuss each of last season’s playoff teams in the AFC and whether or not they have done anything to improve their chances of winning during the 2017 season.

It should be no surprise that I want to focus hear on Colon’s comments about the Steelers, his former team, and he was adamant that “their arrow’s up”.

“I like everything they have done so far” this offseason, he said, though he focused exclusively on the offensive side of the ball. The first piece of the puzzle that he discussed was actually the running back position, though he was always known as a run-blocker.

“I like the addition of James Conner. I feel like he’s gonna be the thunder-and-lightning piece next to Le’Veon Bell”, the former Steeler said. In truth, it’s not clear at all just how many touches Conner might reasonably take from Bell, who is typically a workhorse-style running back.

The lineman believes that Pittsburgh’s offensive line is the second-best in the league, “behind the Dallas Cowboys”, and talked about the quarterback, one of his best friends, whom he discussed his consideration of retirement with.

“Ben Roethlisberger’s back, he’s committed, he’s ready to go to work”, he said. “Antonio Brown will be the key factor, and I think Jesse James, who doesn’t get enough credit, is probably one of the top five tight ends in the league, so I’m excited for the Pittsburgh Steelers”.

That is high praise of James, and I’m not sure that even his parents would agree that he is a top-five tight end in the league right now, but I could understand the optimism as the third-year player continues to grow.

Florio rebutted Colon’s points by unnecessarily pitting them against the Patriots after framing it as an arrow up or arrow down conversation, but the former Steeler said that he agrees with the team that they shouldn’t focus on just New England.

“I think this team knows what they need to do. I think they felt if they had a healthy Le’Veon Bell, they would’ve done a better job in the AFC Championship”, he told Florio. “I know Ben Roethlisberger’s hungry. He wants to get another one. He needs to get another one to really put a cap on his legacy. Obviously he’s gonna be a Hall of Famer, he’s done a great job in his career, but he wants to beat Brady. I know he’s competitive in that aspect”.

He also said that “this team wants to get over the hump. They know the one team in the AFC that’s standing in their way is the New England Patriots. So I think the Steelers are right on par”.

The Steelers have, by the way, fewer than a dozen players remaining form the last Pittsburgh roster Colon was on, and a good percentage of them—four of their five starters—are offensive linemen.