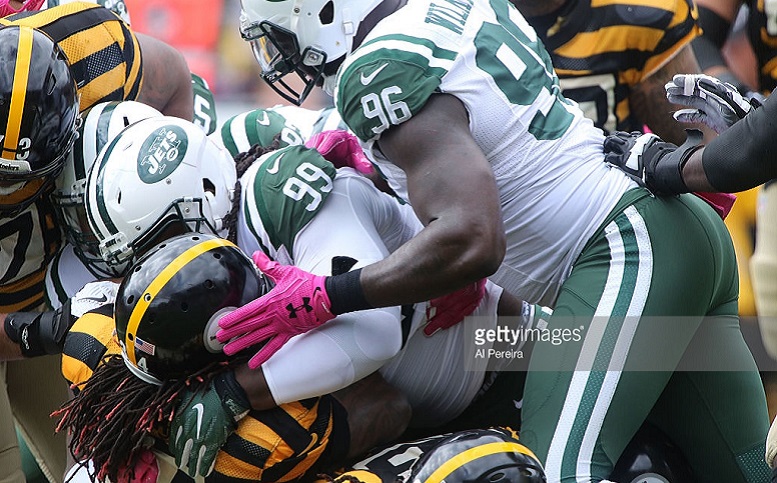 The New York Jets made a few waves on Tuesday when they announced the release of veteran linebacker David Harris in addition to making it known that veteran wide receiver Eric Decker is soon to be gone as well. Those early June decisions makes you wonder if a few more veteran Jets players might be jettisoned soon as well.

With Harris and Decker now out of the Jets immediate plans their team is now left with only four players in their 30s: quarterback Josh McCown, long snapper Tanner Purdum, running back Matt Forte and defensive tackle Steve McLendon. While the first three players on that list are probably safe, you must really wonder if McLendon is.

The Jets signed McLendon to a three year, $10.5 million free agent contract on March 21, 2016 and all things considered, he had a productive first season in New York that included him registering 28 total tackles, 3.5 sacks, 7 tackles for a loss, 6 quarterback hits and a forced fumble in only 11 games played in. In fact, McLendon only played 380 total defensive snaps during his first season in New York.

Despite McLendon playing reasonably well last season, many believe that Deon Simon will ultimately beat him out for the starting nose tackle job this year. Additionally, the Jets signed former Green Bay Packers nose tackle Mike Pennel to a cheap one-year free agent contract this past March and thus one would think he’ll be given an opportunity to compete for a roster spot. Keep in mind that he’s only 26 as well.

So, what if Simon is in the Jets plans to be the starter this year? While McLendon is set to only earn a base salary of $2.875 million in 2017, once Decker is jettisoned, the Troy product and former undrafted free agent will then be the ninth-highest paid player on the Jets roster and the fifth-highest paid defensive player. In short McLendon’s spot on the Jets roster probably isn’t very safe right now and Rich Cimini of ESPN.com hinted as much in a Wednesday morning post.

He [McLendon] might be feeling a bit uneasy after Tuesday’s moves. His salary is a non-guaranteed $3 million, including $250,000 in roster bonuses, and he’s being pushed by Deon Simon. Mike Pennel, formerly of the Green Bay Packers, is another experienced nose tackle on the roster.

So, what if the Jets ultimately part ways with McLendon between now and the final roster cut down date? Would the Pittsburgh Steelers be interested in bringing him back? Before we attempt to speculate an answer to that question, let’s look at what’s going on with the Steelers defensive linemen depth chart.

For beginners, it’s obvious the Steelers are set with their starting three defensive linemen in Cameron Heyward, Stephon Tuitt and Javon Hargrave with the latter serving as the team’s base 3-4 nose tackle and backup nickel interior player. Offseason free agent addition Tyson Alualu presumably has a 2017 roster spot reserved for him as well.

While third-year defensive lineman L.T. Walton will likely have to battle Johnny Maxey for a roster spot the remainder of the offseason, you have to like his chances of ultimately winning a roster spot if he stays healthy. Walton, by the way, has reportedly been receiving some first-team nose tackle reps during OTA practices with Hargrave currently sidelined with a reported shoulder injury and while it’s hard to read a lot into that during this portion of the offseason, it’s worth noting nonetheless. Walton’s first-team OTA nose tackle reps are coming at the expense of defensive tackle Daniel McCullers, who despite being a former sixth-round draft pick, hasn’t really impressed during his first three seasons in the NFL.

In short, and if you consider that the Steelers are only likely to keep six total defensive linemen on their final 53-man roster once again, you have to wonder who will be the team’s backup base 3-4 nose tackle in 2017. Can Walton handle the job? What about Alualu, who while he did move around on the defensive line during his career with the Jacksonville Jaguars, has never really been asked to play a lot, if any, as a 3-4 base nose tackle.

Back to McLendon. It’s obvious the Steelers didn’t want to pay him what the Jets were willing to well over a year ago and that’s not very surprising being as McLendon is a part-time player. Besides, the team needed to get a younger and more versatile player inside, anyways, and they did just that when they drafted Hargrave in the third round of last year’s draft. It doesn’t necessarily mean the Steelers didn’t think over a year ago that McLendon couldn’t play anymore, it’s just that he probably wasn’t worth his asking price.

If ultimately released by the Jets, McLendon’s price tag at such a time would likely be the veteran minimum and at that point he could become attractive to the Steelers again. Defensive line coach John Mitchell has long been a fan of McLendon’s and one would think that’s still the case.

Ask yourself this: Who would you like to see backup Hargrave in 2017, McLendon, or McCullers? For me, it’s an easy choice and it’s McLendon and especially for the minimum.

Now, McLendon still needs to be cut by the Jets before any more time and effort is spent on speculating about him possibly returning to Pittsburgh and there’s no guarantee the Steelers would even be interested in him. With all of that said, if the Steelers are indeed concerned about the backup nose tackle position as they wind down their OTA practices, McLendon could wind up being a legitimate alternative option for them should the Jets decide to part ways with the 31-year-old.

The Steelers obviously can’t plan their 2017 defensive line depth chart around the possibilities of McLendon ultimately becoming available and that might be why we’re hearing about Walton receiving some first-team nose tackle reps during OTA practices ahead of McCullers. Regardless, it might be worthwhile for them to watch what happens with the Jets the remainder of the offseason.