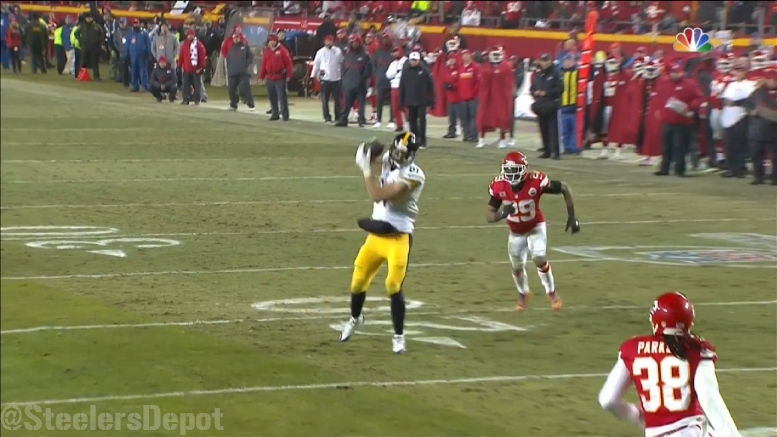 If there is one starter on the offensive side of the ball who is facing the most pressure to grow and improve, I think that I would place my money on third-year Pittsburgh Steelers tight end Jesse James, who is entering his first season in which he is the clear starter, rather than the backup or the injury-replacement starter.

Drafted in the fifth round of the 2015 NFL Draft as an underclassman, it was never, I think, intended that he would be put in a position to be asked to be ‘the guy’ at tight end, but based on the circumstances as they have unfolded over the past three seasons, he has earned the opportunity to demonstrate whether or not he is capable of delivering.

And that seems to be the plan based on all available evidence. Offensive coordinator Todd Haley recently spoke about the Penn Stat alumnus, calling him “a big guy” who “did nothing but make progress” during his first season of extensive work, per that Steelers.com article by Mike Prisuta.

Not that a reminder was needed, but the Steelers signed Ladarius Green in free agency following the retirement of Heath Miller to function as the team’s top tight end. But he missed the first half of the season while recovering from an ankle injury and his season ended early—perhaps his career—with a concussion.

Due to Green’s circumstances, the onus was on James to step up, and he didn’t always manage to do so, to be quite honest. But it also didn’t phase him.

“The most encouraging thing with Jesse was he went through a rough patch last year and he rebounded”, Haley said about his young tight end. “He didn’t go in the tank, so to speak. He kept battling and working hard on the practice field and he got some opportunities. He ended up helping us down the stretch”.

Including the postseason, in the five games after Green’s concussion, James caught 17 passes for 202 yards. That isn’t exactly All-Pro numbers, but it does prorate to a nifty 55-catch, 646-yard season, with the most notable growth coming in the form of yards per reception. He averaged just 8.7 yards per reception for the year in 2016.

“The more you’re here as a skill-position player with a quarterback the better you’re going to get as long as you’re working hard and doing what you’re supposed to do because you’re developing chemistry”, Haley said about James, and his opportunities to work with Ben Roethlisberger.

The two have now had a full year, give or take, of working together and establishing a rhythm, and Haley believes that “there is and has been some chemistry developing between” the quarterback and his new starting tight end.