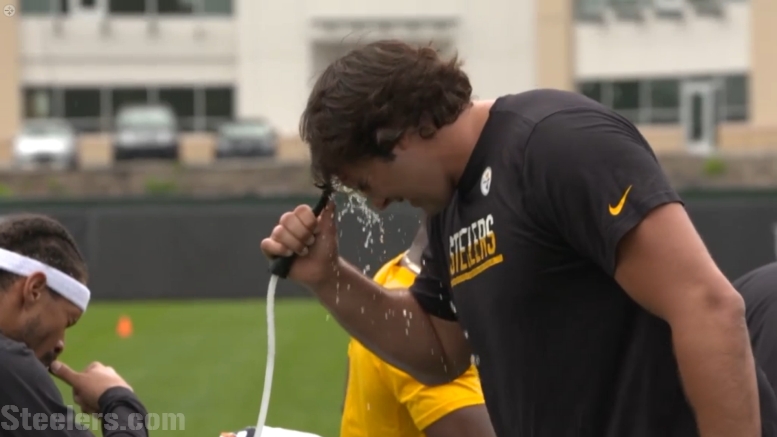 Pittsburgh Steelers tackle Alejandro Villanueva has finally decided to answer questions from the local media about his current contract situation and just as I had hoped he would, he did so in a very cliché manner.

According to Chris Bradford of The Beaver County Times, Villanueva says his current contract negotiations are between himself, his agent and the Steelers front office and it sounds like he pretty much left it at.

Al Villanueva says negotiation is between himself, agent and Steelers front office

Villanueva reportedly went on to say that any other questions related to his contract negotiations with the Steelers should be directed at his agent, according to Chris Mueller also of The Beaver County Times.

Villanueva said to ask his agent anything regarding his contract situation. #Steelers

“It’s not my issue to solve,” said Villanueva, according to Teresa Varley of steelers.com. “It’s a negotiation that’s between my agent and the front office. I play pool with Kevin (Colbert) after practice. It’s something we don’t talk about. I am here to get better. Whatever happens, happens. It’s not something I can control. I am trying to be a Steeler. It’s something my agent and the front office will have to sort out.

“Being part of the Steelers is unbelievable. It’s awesome. It’s a great building. I love everybody here. I have personal relationships. I don’t have a part and say in all that goes on.”

While Villanueva hasn’t yet signed his one-year, $615,000 exclusive rights tender that he received from the Steelers a few months ago, he still took part in all of the teams OTA practices this year after first signing an injury waiver. As for whether or not he’ll take part in the team’s mandatory minicamp next week, Villanueva wasn’t ready to commit to doing that on Thursday and he hinted that he’ll follow the advice of his agent when it comes to him making that decision, according to Ed Bouchette of the Pittsburgh Post-Gazette.

Villanueva: "I’ll do whatever he tells me to do."

Recently, Steelers guard Ramon Foster weighed in with some comments on Villanueva and his ongoing contract situation.

“(The contract) will get done eventually. Kudos to him. He doesn’t have to be here,” Foster said of Villanueva during a recent interview as it relates to his teammate deciding to take part in the teams OTA practices even though he’s yet to sign his tender, according to Joe Rutter of the Pittsburgh Tribune-Review.

Whether or not Foster has any inside information on Villanueva’s contract discussions with the Steelers we certainly do not know and while he did use the word “eventually”, it’s really hard to define what that means when it comes to a timeline. It’s easy to speculate, however, that Foster means prior to the start of the regular season just the same.

In my opinion, it’s good that Villanueva has now gotten this initial talk about his contract situation with the media out of the way even though he really didn’t say anything. He’s obviously a very private person and on top of that, this is the first time he’s experienced such a situation during his NFL career.

I’ve been on record as saying that it’s in my belief that Villanueva will eventually sign a new contract with the Steelers prior to the start of the 2017 regular season for quite a while now. However, I’ve also stated that such a transaction might not happen until the Steelers get running back Le’Veon Bell signed to a new long-term extension as he’s the team’s highest priority right now.

As for whether or not Villanueva will ultimately show up next week for the teams mandatory minicamp, we’ll have to see what happens. He’s not currently under contract with the Steelers and if his agent tells him he should bypass the annual event, I would expect him to do just that.