Shot #1 – We hop in the wayback machine for this first shot. Below are links to a story that Ed Bouchette of the Pittsburgh Post-Gazette wrote about former Steelers center and Hall of Famer Mike Webster exactly 27 years ago today, Jun 11, 1990. Webster talked about how his time with the Steelers ultimately came to an end. Each picture below is linked for easier reading. 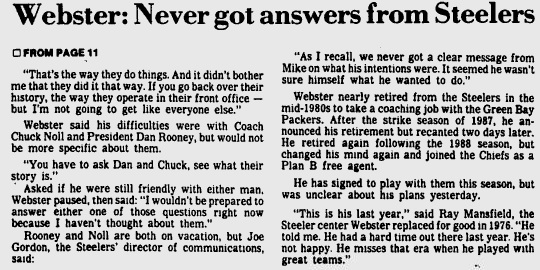 Hand full a rings I'm shaded like Brady ?? swivel. Off that Neva left ????

Shot #3 – Pro Football Focus certainly is getting fancy with their infographics as evidenced by this animated one dedicated to Steelers wide receiver Antonio Brown and his most lethal routes during the 2016 season.

Shot #4 – While the odds are against it happening, Steelers tackle Brian Mihalik is attempting to follow in the footsteps of his teammate Alejandro Villanueva. Ray Fittipaldo of the Pittsburgh Post-Gazette has a great story on Mihalik and the Boston College product talks about making the move from the defensive side of the football to the offensive side.

Shot #5 – Now that the NFL has relaxed their stance on scoring celebrations, it makes you wonder just how creative a few players will be in the future. Do any of you think we’ll see a celebration as elaborate as this one below that took place a few years ago during an Arena Football League game between the Jacksonville Sharks and Tampa Bay Storm? Is this too much?

One of the greatest celebrations of all time pic.twitter.com/NDgxudKMFn

Shot #6 – Actor Adam West, who played Batman in the 1960s television series, passed away on Saturday at the age of 88. I’ve probably seen every one of those episodes at least 10 times as the series ran in syndication quite a while when I was a child. With that said, I didnt realize he was closing in on 90 years of age. RIP, Batman. Speaking of Batman, it would be nice if the Steelers ultimately used their 1966-67 “Batman” uniforms the next time they decide to wear throwbacks. That’s not happening during the 2017 season, but perhaps we’ll see throwbacks resume in 2018 or 2019. Below are some links and a video for you.

Gone but not forgotten: The Steelers' 1966-67 "Batman" uniforms. pic.twitter.com/k6fUyIr08v

Shot #7 – In honor of there now being 91 days until the Steelers kick off their 2017 season on road against the Cleveland Browns, here is an animated gif of defensive end Stephon Tuitt destroying quarterback Josh McCown during a meeting between the two teams last year.

In honor of it now being 91 days until the #Steelers kick off their 2017 season in Cleveland, here is @DOCnation_7 destroying a #Browns QB pic.twitter.com/Vfvxmv3Wtg