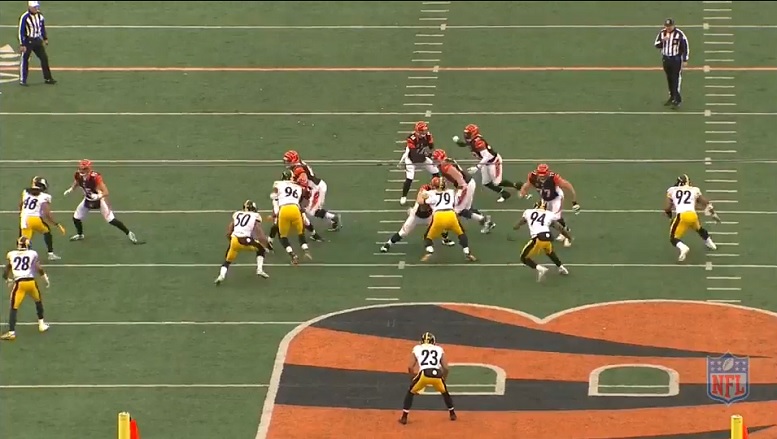 I can’t remember the last time we have been able to say that both the offensive line coach and the defensive line coach of the Pittsburgh Steelers were really happy with their group of players, but that appears to be where they currently are, and that was evidenced in the fact that neither position received a draft pick in 2017.

The Steelers did add offensive tackle Jerald Hawkins in the fourth round in 2016, as well as free agent Ryan Harris, and in the past two years bolstered their defensive line with 2016 third-round pick Javon Hargrave and with 2017 free agent Tyson Alualu, but for the most part, over recent years, the team has not had to address either group a great deal.

And we’re not hearing from Mike Munchak or John Mitchell, the respective coaches of the offensive and defensive lines, lodging any complaints over it, because they are happy with the groups that they already have at their disposal and are looking forward to continuing to work with them.

We got a chance to hear from both coordinators recently, and Mitchell said that he was “really happy” with where his group was, while Munchak was at a loss for criticism of his group, citing only a continued goal to improve consistency, which will be a constant cat-and-mouse chase, because you can never be too consistent.

And both of them should be happy with where they are, because both of them are in a good place—in the case of the offensive line, perhaps the best place they have ever been in during their entire history. At the bare minimum, this is one of the best offensive lines the team has ever fielded.

Including a pair of All-Pros in center Maurkice Pouncey and right guard David DeCastro, budding Pro-Bowl-worthy tackles in Marcus Gilbert and Alejandro Villanueva, and the captain of the All-Underrated team in left guard Ramon Foster, this group is in the conversation to be the best offensive line in football in 2017.

And they not only have starters, they also have depth. Both B.J. Finney and Chris Hubbard proved capable of stepping in and starting for multiple games while preventing a drop-off in play, which is quite a lot to ask. And the Steelers are excited about what they have in last year’s fourth-round pick, Jerald Hawkins. It’s enough to forget about the intrigue of Brian Mihalik, who could have a future himself.

As for the defensive line, they look to finally have their starting three they’ve been seeking for years. Cameron Heyward and Stephon Tuitt area obviously the thoroughbreds at defensive end, but the influx of Hargrave and his predictable growth into this season is going to be a big deal.

And they are developing the depth that they have also been searching for going on a few years now, starting from within with L.T. Walton, but the addition of Alualu was a key goal as well. Throw in Johnny Maxey and Daniel McCullers, and you have a well-rounded pool of talent.