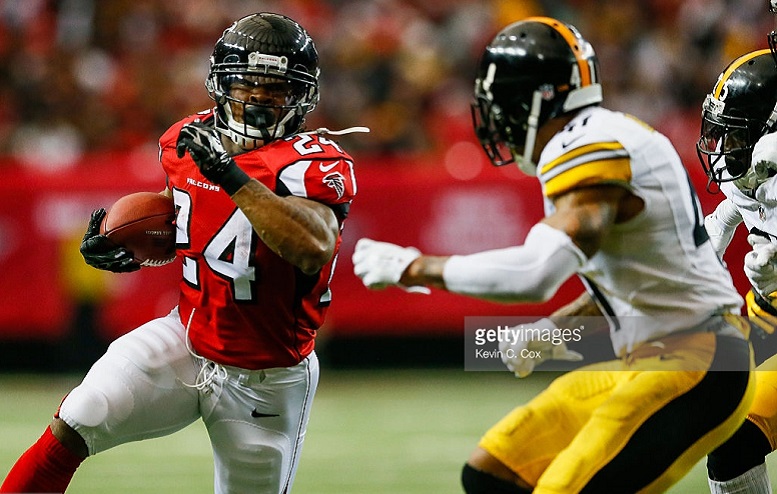 It certainly is very hard to judge individual draft picks the Pittsburgh Steelers have made in the past in a rearview mirror as so many times in doing so is that what’s not considered is that the subsequent ripple effects also need to be accounted for. Basically, you can lose yourself down a long and winding wormhole playing the “what-if” game, but with that said, I want to look back at one particular selection the Steelers made during the 2014 draft and the potential resulting ripple effects that would have likely occurred had they drafted a certain other player.

In the third-round of the 2014 NFL Draft, the Steelers selected running back Dri Archer with the 97th overall selection and that pick surprised quite a few people being as the team seemingly already had their future longtime starter at that position in Le’Veon Bell after drafting him in the second-round a year earlier. Additionally, the Steelers had already signed running back LeGarrette Blount to a two-year contract on Mar 28, 2014.

Archer, an undersized and lightweight running back out of Kent State, was speedy, however, and considered a triple threat as not only did he rush for 2,342 yards on 325 total carries and caught another 99 passes for 1,194 yards during his college career, he also returned 51 kickoffs for 1,436 yards with four of them resulting in touchdowns.

Archer, as all of you know, ultimately flamed out quickly in Pittsburgh and was gone midway through the 2015 regular season at that.

So, what if the Steelers had selected running back Devonta Freeman instead of Archer and was such a pick even plausible at the time?

For starters, the Steelers seemingly had some level of interest in the former FSU running back as general manager Kevin Colbert, head coach Mike Tomlin and offensive coordinator Todd Haley were all in attendance at his 2014 pro day. With that said, FSU had several top-ranking draft class members that year with one of them being wide receiver Kelvin Benjamin. The Steelers were in the market for a wide receiver that year as evidenced by the ultimate selection of Martavis Bryant in the fourth round. In short, we can’t really say for sure if the Steelers had anything more than just passing interest in Freeman ahead of the 2014 NFL Draft and not that it’s a deal breaker, the running back wasn’t brought in for a pre-draft visit.

Like Archer, Freeman was undersized at 5-8, however, he was bulkier at 206 pounds. While he didn’t return kickoffs during his college career, Freeman was a reputable duel threat at the time as he did catch 47 passes for 475 yards during his three seasons at FSU in addition to rushing for 2,255 yards on 404 carries.

In summation and all things considered, I think it’s plausible that Freeman could’ve been drafted by the Steelers. After all, the Atlanta Falcons drafted him just six picks after the Steelers selected Archer. As far as I’m concerned, the Falcons should send the Steelers a gift basket as a thank you for leaving Freeman on the board for them.

So, let’s assume the Steelers had chosen Freeman over Archer. What would have likely been the ripple effects of such a selection?

First, we must go back to the fact that the Steelers had both Bell and Blount on their roster at that time and because of that, Freeman would’ve likely been a weekly candidate for the inactive list to start his rookie season since he likely wasn’t geared to play on special teams. Even if he would have dressed early during his rookie season, Freeman more than likely wouldn’t have seen the field any on offense.

Now, nobody could have foreseen what ultimately happened with Blount during the 2014 regular season and that’s an interesting dynamic to this “what-if” scenario. If our rearview mirror views include Blount being jettisoned after the Steelers 2014 Week 11 regular season game against the Tennessee Titans, then it’s not hard to imagine that Freeman would have likely become Bell’s backup.

Bell, as you all know, wound up being unavailable for the Steelers Wild Card game against the Baltimore Ravens that season due to a knee injury and the Steelers were forced to turn to Archer, Josh Harris and late street free agent addition Ben Tate as their ball-carries for that contest. Does that still turn your stomach to this day?

Would Freeman have made a difference in the outcome of that game against the Ravens? It’s hard to say, but it’s worth noting that the Steelers three aformentioned running backs combined to rush for just 43 yards on 15 carries in addition to catching 7 passes for another 30 yards. I will leave it to all of you to decide what kind of impact Freeman may have made in that game and potentially future playoff contests that year had the Steelers beaten the Ravens.

Now for another dynamic and possible ripple effect that needs to be discussed in this “what-if.”

The Steelers signed then-veteran free agent DeAngelo Williams to a two-year contract on Mar 13, 2015 and less than a month later, Bell was suspended for the first three games of that season for violating the league’s substance abuse policy. One can easily speculate that Williams might not have been signed had the team drafted Freeman instead of Archer, right?

Freeman would have likely started the first two or three games of the 2015 season for the Steelers in place of Bell, who ultimately had his suspension cut by one game. Freeman also likely would’ve taken over as the starter later in the season after Bell suffered his serious knee injury in Week 8. The unanswerable question again then becomes, would Freeman been able to be as effective as Williams was to close out the 2015 regular season?

While Williams ultimately did fill in very admirably for Bell, a foot injury that he suffered in the Steelers 2015 regular season finale against the Cleveland Browns prevented him from playing in both Steelers playoff games that year and thus the team was forced to use Fitzgerald Toussaint and Jordan Todman in those two games.

Last year, and assuming Williams had never been signed, Freeman likely would have been the starter at the beginning of the season due to Bell being suspended once again. Freeman likely would have also replaced Bell in last year’s AFC Championship game against the New England Patriots after he exited early with his groin injury. Would Freeman had made a difference in that game? The way the Steelers defense played in that game, it’s very doubtful, but worth pondering just the same.

Ok, now let’s close this post out with yet another dynamic that needs to be discussed in this fantasy hypothetical.

Currently, Bell is wearing the franchise tag and that was likely going to happen this offseason regardless of whether or not the Steelers had drafted Freeman instead of Archer. Freeman, however, would now be entering the final year of his rookie contract and assuming he had filled in admirably for Bell during the last two seasons the way Williams ultimately did, he would likely be looking for a nice contract, albeit unlikely top running back money like he’s hoping to get very soon from the Falcons.

With Bell now wearing the tag, the Steelers might have decided to let Freeman go on and play out the final year of his rookie contract. However, if Bell ultimately doesn’t sign a long-term deal, the Steelers would then likely need to decide next offseason whether or not to tag either Bell at an estimated $14-plus million, or Freeman at potentially a much lower number due to the recent fallout of the running back market.

Another thing to ponder is the fact that if Bell ultimately doesn’t sign a new long-term deal prior to the July 17 deadline, the Steelers would then have the remainder of the offseason to sign Freeman long-term and potentially at a very attractive average yearly salary, and thus entirely forgo the need to use their 2018 tag on a running back.

In short, the Steelers would perceivably still have both Bell and Freeman for the 2017 season and quite possibly still could have ultimately drafted running back James Conner this year. If they had passed on Conner this year, and all other running backs for that matter, they still could’ve signed free agent running back Knile Davis to a one-year contract for the minimum this offseason. Davis, by the way, is currently the heavy favorite to win the kickoff returner job this year which is what Archer would likely still be doing had he ultimately worked out.

If you haven’t already closed this post due to laughter, or your head hasn’t already exploded, I’m interested to hear all your thoughts on this subject. I mean, what else or we going to talk about right now? Am I missing any ripple effects?