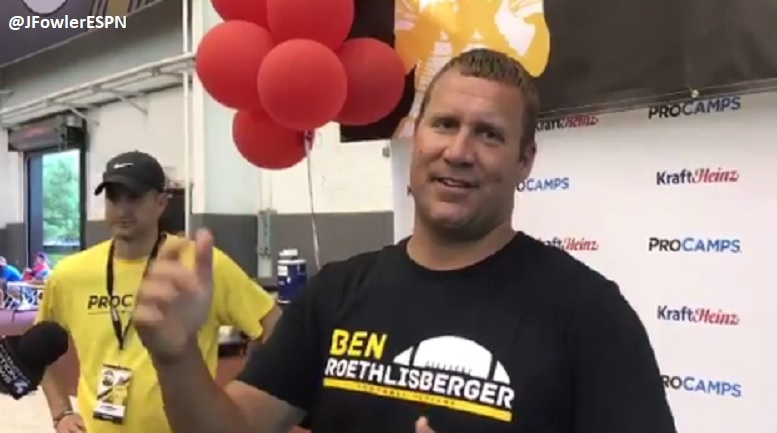 If there’s any one NFL quarterback that knows all about the need to be able to put a play behind him quickly, it’s Ben Roethlisberger.

Roethlisberger, who over the course of his career has been either intercepted or sacked a total of 616 times during the regular season alone so far during his 13 years with the Pittsburgh Steelers, made sure to convey a message about being able to put either a good or bad play behind one’s self quickly to the large group of kids who turned out for his annual ProCamp on Sunday at at the UPMC Rooney Sports Performance Complex.

“You’ve got to put the old stuff behind you. Just like me, when I throw an interception, I can’t think about it for the next pass, because I have to move on,” Roethlisberger told the kids in attendance. “Because the next pass, I’m expected to throw a touchdown. So, every single play you make out there, whether it’s good or bad, enjoy it for a second, or think about the negative for a second, and move on.”

In addition to talking to the kids on Sunday, Roethlisberger also talked to the media for a moment as well and as you can see in the video below provided by Jeremy Fowler of ESPN.com, he explained what kind of drops he teaches the fledgling quarterbacks.

The fact that Roethlisberger spent Father’s Day teaching other children at his football camp speaks volumes. After all, he does have three children of his own. Roethlisberger and the rest of the Steelers are now off for the next month and a half before the start of training camp in late July at Saint Vincent College in Latrobe.

Steelers QB Ben Roethlisberger talks to campers about the importance of moving onto the next play. pic.twitter.com/DLx6Pej5KH