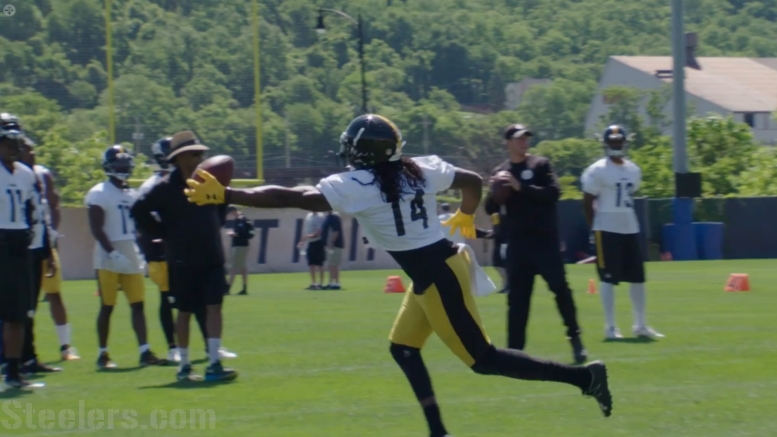 It’s early in the season but if this report from PennLive’s Jacob Klinger is any indication, Sammie Coates isn’t off to a hot start.

In a list of ten players who either helped or hurt themselves during minicamp, Coates found himself on the latter list. Klinger’s note is short but clear.

“Coates’ struggles of 2016, which were fair to blame on broken fingers, haven’t left him alone in 2017 either. There’s a dogfight to make the Steelers’ roster as a wideout this year and Coates is very much in it.”

There isn’t any specificity of what those “struggles” are, though you can imply he isn’t catching the ball cleanly. Showing off his less-mangled hand earlier in the spring, Coates said his hand was “good” but also noted he was working on getting back the strength in it. That may still take some time and create a bumpy start to the offseason. He now has about five weeks to get back to full strength.

Because regardless of how accurate Klinger’s minicamp assessment is, he’s right that Coates’ spot isn’t locked up heading into Latrobe. A strong training camp should keep him on the roster but a bad one, or at least, a rocky one, will leave the door open for Justin Hunter to take his spot. Wide receiver is the deepest position on the roster with Demarcus Ayers looking to get on the roster out of the gate while Darrius Heyward-Bey brings other value to the team in leadership and coverage ability.

Historically, the team keeps five to six receivers, meaning there could be upwards of four players with legitimate talent who don’t make the 53.

As we’ve pointed out before, Coates had a blistering start last season, showing his trademark vertical ability and showing growth in becoming a well-rounded receiver. He went invisible following his injury, sat on the bench and getting work as a gunner on special teams. When he was part of the offense, he struggled with drops. Coates officially finished with five drops on 21 catches.

That number will have to change in order for him to stick come Week One against Cleveland.