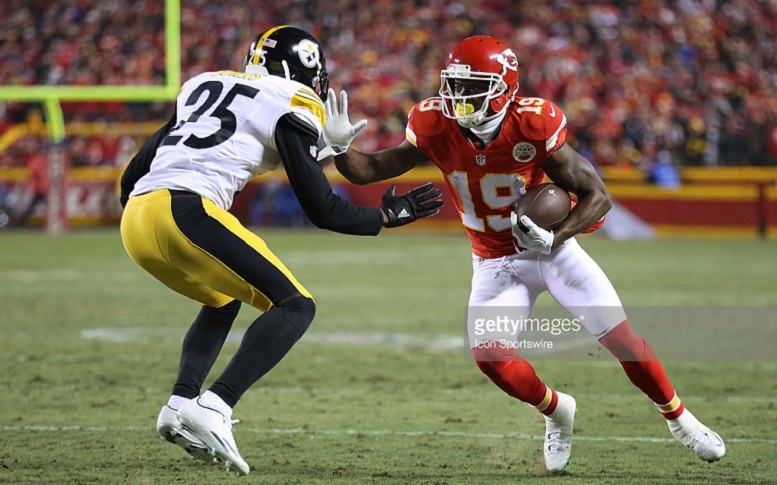 There’s a new veteran wide receiver in the AFC North as of Monday as Jeremy Maclin has reportedly agreed to a two-year contract with the Baltimore Ravens, according to Adam Schefter‏ of ESPN.

Ravens and WR Jeremy Maclin agree to a two-year deal, per source.

Maclin, who was recently released by the Kansas City Chiefs after spending the last two seasons with them, also reportedly had the Buffalo Bills and the Philadelphia Eagles interested in his services.

Maclin, who was originally drafted by the Eagles in the first-round of the 2009 NFL Draft out of Missouri, has registered 474 receptions for 6,395 yards and 46 touchdowns during his first eight seasons in the NFL. His 2013 season, however, was over before it even got started due to a torn ACL that he suffered during training camp as a member of the Eagles.

Last season, Maclin missed four games as a member of the Chiefs because of a groin injury and he ultimately ended the year with career-lows in receptions (44), receiving yardage (536) and receiving touchdowns (2).

The Ravens offense lost a key wide receiver during the offseason when Steve Smith Sr. retired. Ahead of them signing Maclin on Monday, the Ravens top three wide receivers were expected to be Breshad Perriman, Mike Wallace and Michael Campanaro, who has had problems staying healthy.

To make matters even worse for the Ravens, offensively, veteran tight end Dennis Pitta needed to be released last week by Baltimore with an injury waiver designation after suffering yet another hip injury during one of the team’s OTA practices.

Including last year’s Divisional Round playoff game, Maclin has faced the Pittsburgh Steelers three times during his NFL career and has caught a total 12 passes for 145 yards without a touchdown. He also just turned 29 in May. The veteran wide receiver now has the remainder of the summer to work on learning the Ravens offense and trying to develop some sort of rapport with veteran quarterback Joe Flacco.

Schefter said he believes the Ravens might look to sign veteran wide receiver Eric Decker as soon as the New York Jets finally part ways with him.