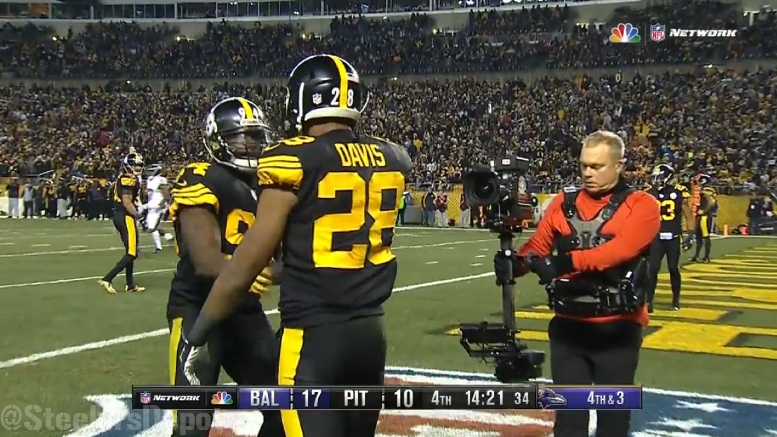 In the last edition of  “Ranking the Rooms: AFC North” series here at Steelers Depot, I took a look at the cornerbacks room, where the Cincinnati Bengals edged out the Baltimore Ravens for first place.

This week, roles reverse as we take a look at the safeties in the AFC North.

Any time you have Eric Weddle in your room on defense, you’re going to get a ton of respect out of me.

Weddle is a veteran safety that has been near the top of the league for safety play year after year, making it look easy.

I’m still perturbed he spurned the Steelers for the Ravens in free agency, but he’s still an elite safety in today’s NFL.

Opposite of Weddle, the Ravens dipped back into the free agency market this spring, signing Tony Jefferson away from Arizona for a reasonable contract, swiping him away from the Browns, who offered a larger contract.

With Weddle and Jefferson, Baltimore might have the best starting safety duo in football, and it might not be as close as others thing.

Behind the duo, veteran Lardarius Webb will provide depth after moving from cornerback due to injuries and age. Who knows how productive he’ll be, but I’m sure he can come in and provide the Ravens with good play in a pinch.

Rookies Chuck Clark and Daniel Henry won’t be counted on to do much defensively, outside of special teams, but should Jefferson and Weddle stay healthy, there’s no need for them to be ready to go defensively.

The one wild card here is Anthony Levine Jr., who is listed as a DB/LB and should be able to play a hybrid role once again this season for the Ravens.

I’ve been hard on Mike Mitchell a lot in his Steelers career, but I’ve never denied how good he is in Keith Butler’s system as a centerfield-type safety that drops the hammer against the run and strikes fear in receivers coming across the middle.

Sure, he doesn’t force a ton of turnovers (just 8 in his Steelers career), but I’m not asking him to be a ball-hawking safety. Neither should the Steelers. He’s doing a great job in his role.

Next to Mitchell, second-year safety Sean Davis is poised to take a massive jump in his second full season in the NFL. After starting off his Steelers career at slot corner, the move to safety next to Mitchell really allowed Davis to blossom, serving as one of the brightest spots on the defensive unit last season.

Able to cover slot receivers, tight ends and running backs, Davis is the jack-of-all-trades safety in today’s game. Expect his sack numbers to rise this season as well.

Behind Mitchell and Davis, veteran Jordan Dangerfield is a good special teams contributor and really filled in well at safety at times in recent years for the Steelers, bringing physicality and speed to the position.

Robert Golden was expected by many to be the next starter opposite Mitchell, but he never really got on track last season, eventually losing his job to Davis. However, Golden is in a better spot now, where he can focus on his elite special teams play, providing the Steelers with veteran leadership in that area.

William Gay could make a move to safety this year to try and hold down a spot on this roster, but with the room looking the way it does now at safety for the Steelers, I can’t see Gay showing enough at safety to earn a spot.

George Iloka holding down the starting job in the back half of the defense for the Bengals makes this group of safeties in Cincinnati a respectable one.

A physical presence that really grew into his own when Mike Zimmer was still around as defensive coordinator, Iloka has added coverage skills to his tool palate, giving the Bengals a great all-around safety.

Shawn Williams came on strong last season for the Bengals, even if Cincinnati fans were a bit hard on him at times last season. He’s not a great coverage guy, but he supports the run well and is a strong tackler in the back half.

Behind Williams and Iloka, second-year safety Clayton Fejedelem can come in and play some snaps here and there for the Bengals, but he’s more suited for special teams.

Rookie Brandon Wilson could develop into the long-term starter next to Iloka due to his coverage skills, physicality and knack for making plays on the ball, but for now he’ll struggle to get snaps.

Veteran safety Deron Smith can’t seem to stay healthy and live up to his potential, but if he can get right this season, the Bengals might jump the Steelers in this list for next year.

Although the Browns come in at No. 4 here on this list, there are plenty of high-upside guys in the room for Cleveland, starting with Derrick Kindred, a physical safety who took over the starting job last season and really left a mark.

Next to Kindred, Ed Reynolds II is an overlooked safety, but he seems to be in the right place at the right time more often than not and is a solid tackler with some underrated physicality.

Third-year safety Ibraheim Campbell has yet to get on track in Cleveland, but he’s a former high-upside draft pick that plenty of evaluators liked coming out of Northwestern.

Rookie Kai Nacua could develop into a decent starter for the Browns, but he has the look of a guy that doesn’t do much in the NFL outside of special teams.

Where this room really has some upside is with Calvin Pryor III, whom the Browns just acquired from the New York Jets in a one-for-one trade.

Pryor III was a solid player two years ago in Todd Bowles’ first year at the helm, but 2016 was disastrous for the Louisville product. Maybe a change of scenery and a chance to learn and play under the watchful eye of Gregg Williams does wonders for him.