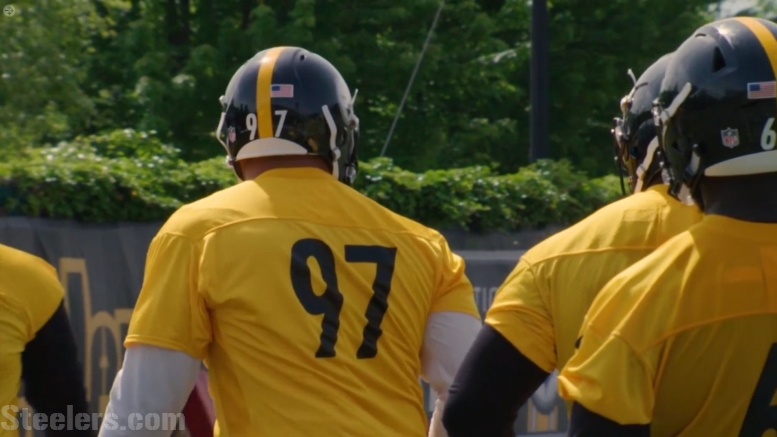 In the last installment of “Ranking the Rooms:  AFC North” I took a look at the big uglies in the trenches on offense, with the Pittsburgh Steelers’ offensive line group coming in first.

This week, I’ll take a look at the big uglies in the trenches on defense as we move along quickly in this series.

With names like Cameron Heyward and Stephon Tuitt in the mix, it’s hard to find a better defensive line group in the AFC North than the defending division-champion Steelers.

Add in standout second-year pro Javon Hargrave and this defensive line gets put over the top.

The trio combined for just 9.0 sacks last season, but Heyward missed half the season with a torn pectoral, so those are impressive numbers from a group missing its best player for roughly half the season while also working a rookie into the fold.

Expectations are very high for the trio coming into the 2017 season with presumptive health for all three this season.

Behind Tuitt, Heyward and Hargrave, the Steelers don’t possess a ton of depth, so veteran defensive lineman Tyson Alualu will be asked to play both end positions and could see some time behind Hargrave this season in hopes of keeping all three fresh for the playoffs.

Behind Hargrave, mammoth Daniel McCullers has yet to put it all together to realize his potential, but he’s a massive mountain of a man that can clog up lanes.

There’s not much good depth here, but the Steelers have great starters and one key reserve. This is a very good group.

The Bengals certainly have a ton of names here with defensive ends Carlos Dunlap and Michael Johnson back, as well as All-Pro defensive tackle Geno Atkins, but outside of that trio there’s plenty of question marks along the defensive line for the Bengals.

Granted, those question marks have very high ceilings, but they’re just absolute unknowns at this point.

Second-year pro Andrew Billings looks to replace Domato Peko this season after missing his rookie season with a knee injury, while veteran reserves Will Clarke and Wallace Gilberry look to build off of decent seasons in 2016.

What the Bengals do have going for them though along the defensive line is a ton of depth. Rookies Jordan Willis and Carl Lawson provide a ton of depth at defensive end and have very high ceilings for Cincinnati, while rookie defensive tackle Ryan Glasgow could work his way into a rotational role as quickly as this season for the Bengals.

Should some of these young guys pan out this season for Cincinnati, they could easily work their way into the No. 1 spot in this series heading into next season.

Heading into last season I was really skeptical about the way the Browns were building this area of the team, but as of right now I love it.

Selecting Myles Garrett No. 1 in the draft makes this group so much better, but outside of that there’s a ton of depth and upside here.

Joining Garrett is rookie Caleb Brantley, who was cleared of any wrongdoing in a possible assault case prior to the draft, while fellow rookie defensive tackle Larry Ogunjobi has a serious motor and could be a gem for the Browns.

Outside of the trio of rookies, incumbents Desmond Bryant, Xavier Cooper, Danny Shelton, Carl Nassib and Jamie Meder provide the Browns with some ridiculous depth at the position in terms of names alone.

While that doesn’t always pan out, the Browns finally have high-end options here to work with.

The same can’t be said for the last group on this list.

Losing Timmy Jernigan and Lawrence Guy this offseason really hurt the Ravens in the trenches on defense, but fortunately they were able to hang on to Brandon Williams in free agency, keeping him away from the Titans.

By keeping arguably the best 3-4 defensive tackle in football around, the Ravens have some semblance of a defensive line, but there are plenty of questions at the end positions that could hurt the Ravens’ chances this season.

In 2017, Baltimore will likely rely heavily on rookie Chris Wormley out of Michigan, and fourth-year pro Brent Urban at defensive end, while hoping to work in second-year pro Bronson Kaufusi and rookie Patrick Ricard at the end positions.

Fortunately for Baltimore, they have tons of depth at defensive tackle behind Williams with Willie Henry, Carl Davis and Michael Pierce, so you could see some of those players possibly kick outside to defensive end.

That being said though, it’s not a great group up front for the Ravens.