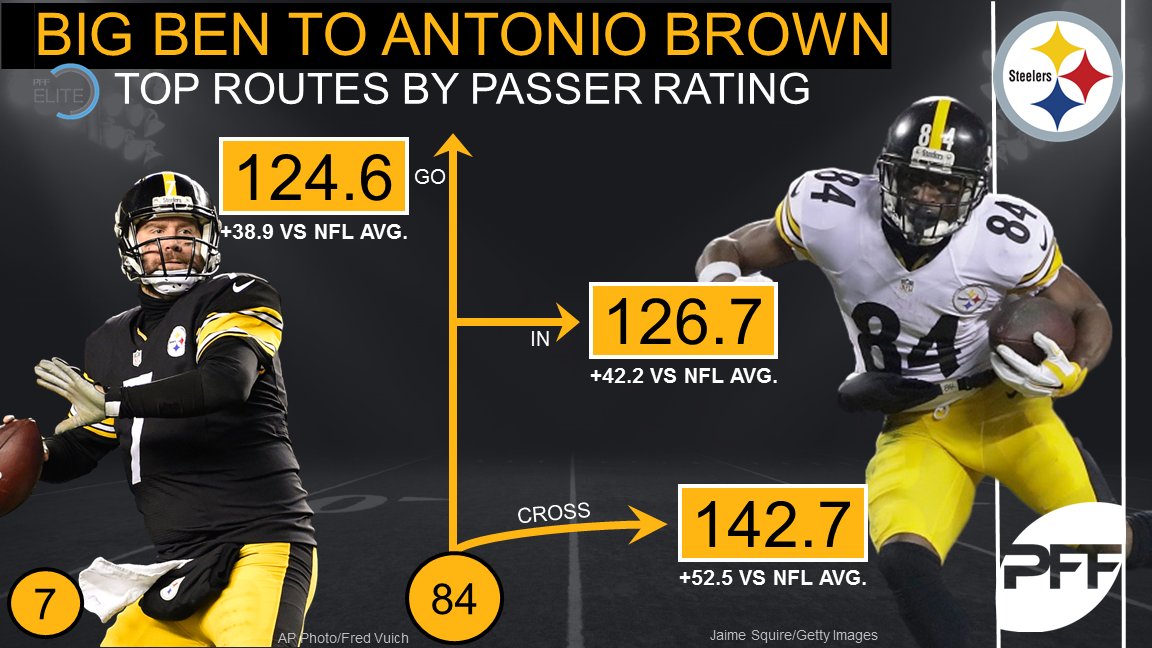 How do I praise thee? Let me count the ways.

That’s how it feels sometimes when writing about Pittsburgh Steelers wide receiver Antonio Brown, who has been the best player at his position over the course of the past four seasons, and is now being paid like it. There is so much to praise about his performance, and so many different ways, that it can become overwhelming.

But thanks to Pro Football Focus, everybody’s favorite media outlet, I have yet another way to praise him. The site goes above and beyond when it comes to data tracking, down to recording the types of routes every wide receiver runs on every snap that they take. Not even we do that, to be perfectly honest.

They have recently taken to posting graphics on Twitter of certain standout wide receivers and highlighting the routes on which they have performed above and beyond the league standard. Brown’s turn to be highlighted came yesterday.

According to their numbers, the veteran Steelers pass-catcher recorded a 124.6 wide receiver rating (that is, the quarterback rating when targeted) on go routes, which is 38.9 percentage points better than the league average.

Now, whenever we write about something from Pro Football Focus, it tends to start a debate, and plenty of trashing of the outlet. But in this instance, I don’t think it would be warranted. This is pretty objective data here. There are no grades involved. It’s just looking at routes, looking at what happened on those routes, and calculating the quarterback rating.

I mean, we could probably ballpark it that a 142.7 rating on crossing routes is going to compare pretty favorably to the average performance, but it paints such a more precise picture to have actual data to draw from.

But this isn’t an infomercial for Pro Football Focus, just some interesting data that they put together that I wanted to pass along. The point is that Brown is really good—nothing we didn’t already know—but also that he was particularly really good on certain areas of the field last season.

Some of it is pretty easy to confirm. He had eight touchdowns of 20 yards or more on deep targets, for example, strongly indicating a very good level of production on go routes.