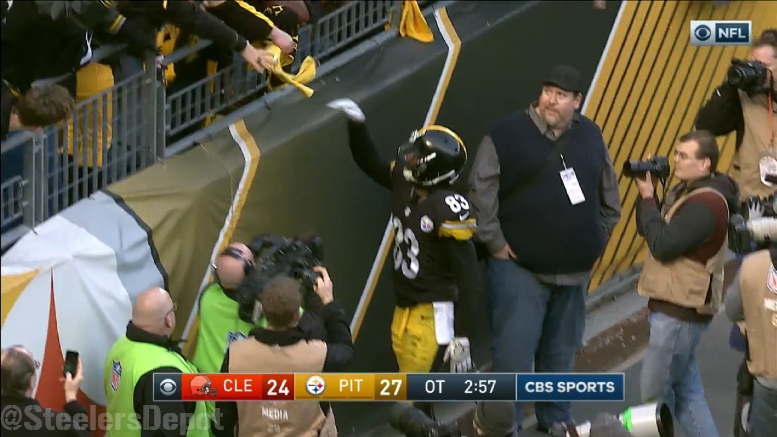 Hamilton is certainly on the outside looking in for a roster spot among a crowded wide receiver room. But that doesn’t mean we have to stop talking about how he can improve to ultimately increase his chances of sticking.

Hamilton was the sure-handed third down receiver for the Steelers a year ago. His 90.9% catch rate on third down was easily the best on the team, nearly 15 points higher than second place. However, he was good for – typically – only a catch or two per game, doing so in 12 of 14 games he appeared in. Such facts weren’t lost on Ben Roethlisberger, who once told Hamilton before a game he better catch more than one pass.

It was also what Hamilton did with the ball after the catch that hindered him. In fairness, most of his work came on third down (10 of his 17 receptions) where getting to the sticks and hauling the pass in is more important than getting YAC. But his YAC wasn’t just poor; it was practically non-existent. I don’t believe on any of his receptions did he have more than three of four yards of YAC, mostly coming from him falling forward at the end of a tackle. In this offense, receivers need to make their mark following the catch.

One issue was him leaving his feet unnecessarily in order to make the catch. It happened arguably three times, which for a guy who caught 17 passes, is a good chunk of them. Here’s one example.

RPO that hits Hamilton on the swing. Can’t make the corner miss and goes down for no gain.

The last example comes in the AFC Title game against the New England Patriots. Hamilton running a slant. Makes the catch but he has to do a better job to shake off the trailing cornerback. Difference between the end zone and getting stopped. Instead, he’s tackled short and the Steelers end up turning the ball over on downs. At that point, in a now 33-9 game, it truly felt over. If the Steelers make it 33-16 early in the 4th? They still have life.

I’m not asking – or expecting – Hamitlon to become some sort of slot receiver or Antonio Brown type. But I’d like to see at least one play where he’s creating after the catch. To stay on his feet, play a little physical on the ground, and show some more elusiveness. He could still wind up on the practice squad and based on what happened last year, maybe ends up seeing the field again.