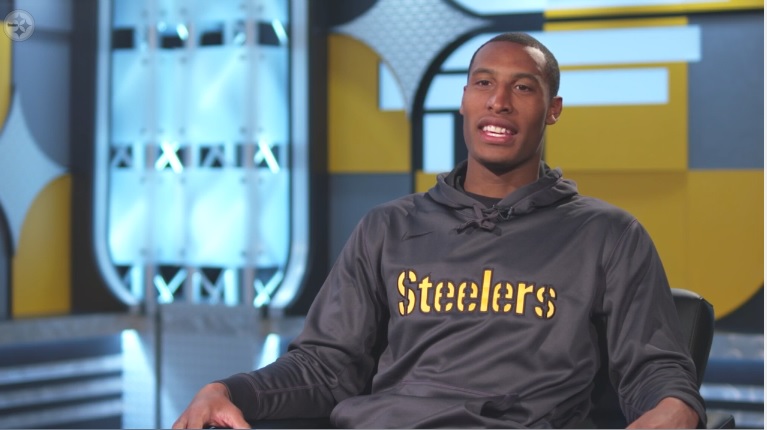 Brian Allen had never played defense in his football career. When Utah asked him to make the switch for the 2014 season, there was some hesitation.

Looking back, it proved to be the right decision. Allen turned into one of the PAC-12’s best cornerbacks and was drafted by the Pittsburgh Steelers in the fifth round of this year’s draft.

Still, there was a steep learning curve.

“The most difficult part was learning to play backwards because I had never played any defense before in my life,” he said in a sit-down interview with Steelers.com’s Missi Matthews. “Backpedaling was totally different. It was awkward for me, just felt all wrong. But since I’ve made the transition, worked with different coaches here and there, getting advice from guys who have been in my situation, I fell in love with the position.”

Allen is now using his long frame to jam receivers at the line of scrimmage instead of catching passes. But that wide receiver background still kicks in when the ball is in the air. Allen showed some serious ball skills in rookie minicamp, making this sensational interception we showed you last month.

Brian Allen's sick INT from rookie minicamp. Drafted to do things like this. pic.twitter.com/ZowzpB00nk

“For my size, I”m a bigger, longer corner. I like to get up there and disrupt any way I can.”

It’ll be up to Carnell Lake to work with him and mold him into a starting talent. The Steelers don’t have a good track record of Day 3 defensive backs, the list would hurt your eyes, but I’m not sure if any prospect has had the upside Allen brings to the table.

As we’ve written, Allen’s selection is another nod to an evolving Steelers’ defense. One that leans towards bigger, more physical corners who can play at the line of scrimmage. How well Allen can do that at the NFL level remains to be seen. But if he deals with the transition to the NFL as well as he did making the switch to cornerback, the Steelers got a steal.