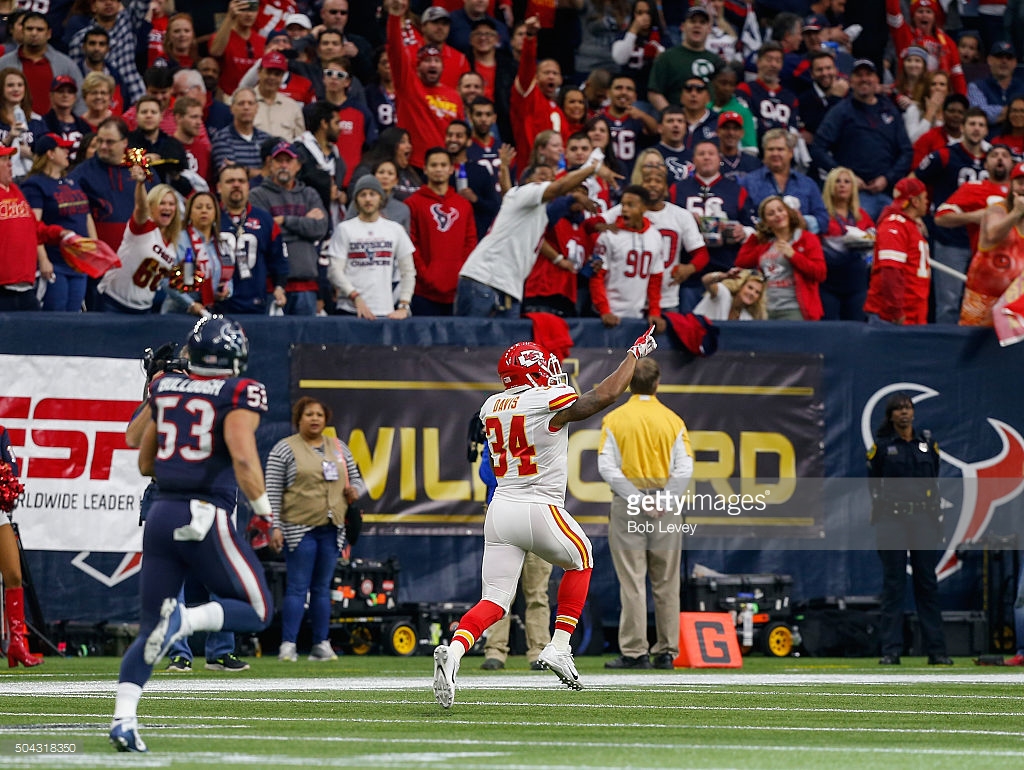 When Knile Davis came out of college for the draft, one thing that was not on his scouting report was anything about his ability to return kicks or punts. The reason for that is actually extremely simple: it was not something that he did in college. Or in high school.

“I’d never returned kicks in my life”, he told Chris Adamski earlier this offseason. But he said that the Chiefs’ special teams coordinator decided to give him a look back there as a rookie. “So I went for it”, he said, “and I had success”.

Davis has averaged nearly 27 yards per kick return over the course of his four-year career on 73 returns, and that does not even factor in the 106-yard kick return for a touchdown that he had against the Texans in the 2015 Wildcard game. The following game, he averaged 30 yards on three returns.

So if you do include the postseason, Davis has returned 77 kicks in his career for 2156 yards, averaging 28 yards per return, with three touchdowns.

The Steelers, meanwhile, have not had a kick return touchdown since 2010, and even that was on a gadget play. They certainly would not object to bringing in somebody who could do that for them, although Davis did not have a return touchdown last year. In fact, he returned just 10 kicks for 207 yards, averaging under 21 yards, with none 40 or more yards.

While he may not have had success last year after being replaced by the dynamic rookie returner Tyreek Hill, however, Davis is looking forward to earning the Steelers’ kick return job and demonstrating that he is still more than capable of getting the job done.

“It’s something that I love to do”, he told Adamski, calling it “something that’s helped me stay around the league, something that gave me another avenue to make a name for myself”. With under 300 offensive touches over a four-year career as a running back, it should go without saying that the return game has helped to keep him employed.

Davis acknowledged that when it comes to getting off a successful return, “there’s some scheming to it, some misdirection” but ultimately, he said, “at the end of the day, it is backyard football. You just need to know where to be”.

We have sort of put a damper on his signing over the course of the past month or so, focusing in particular on his career was a runner, trying to explain why he has averaged 3.2 yards per carry. But the past is in the past, and he has a fresh opportunity in Pittsburgh.

He even told Adamski that he has been running on just about every unit on special teams, doing everything that he can to make himself useful. As Mike Tomlin would say, “the more you can do”.