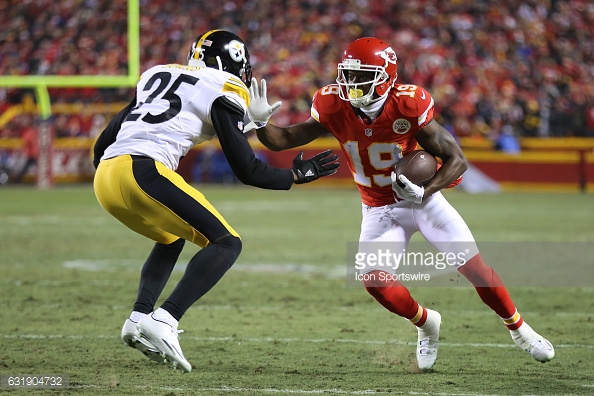 So, as you no doubt have read by now, the Baltimore Ravens were indeed able to land free agent wide receiver Jeremy Maclin, who was a surprise late roster cut early in June by the Chiefs. The former Kansas City and Philadelphia wideout will provide an immediate and much-needed contributor to a pass-catcher-starved Ravens offense in the wake of Steve Smith’s retirement.

Maclin figures to slide into the slot, a position in which he has seen significant time over the course of his career, with Mike Wallace and Breshad Perriman as the primary outside wide receivers, but it is certainly possible that Maclin starts and plays outside when they operate in two-receiver sets. In fact, I might go so far as to call it likely, even at this early stage.

The funny thing about the Ravens is that, for as excellent a reputation as Ozzie Newsome has as a talent evaluator, he seems to have a terrible time with picking out that wide receivers that are capable of transitioning from the college level to the pros while maintaining an appropriate level of success.

That is why some of their best wide receivers in franchise history have been free-agent acquisitions, in a list that is only extending in length with recent history. Smith is just one, and Maclin the latest, with former Steeler Mike Wallace in between as he enters his second season with the team, both as a starter.

The Ravens’ leading receiver in franchise history is Derrick Mason, who recorded over 12,000 yards in his career. But more than half of that came during his eight seasons in Tennessee before he joined the Ravens. He spent six seasons in Baltimore, catching 471 passes for 5777 yards and 29 touchdowns.

Another name high on the Ravens’ list is Qadry Ismail, who was a six-year veteran by the time he joined Baltimore in 1999. He caught 191 passes for 2819 yards and 18 touchdowns in three seasons with the team while ranking high on their all-time list.

Some of their best wide receivers actually traveled with them from Cleveland to Baltimore in the form of Michael Jackson and Derrick Alexander. Both of them averaged over 1000 yards in the first two years of Ravens history as receivers, and both of them had 18 touchdowns in those two years. Alexander moved on the next year, while Jackson, the older of the two, played one more year in Baltimore before retiring.

Statistically, the most productive wide receiver the Ravens have drafted remains Torrey Smith, a second-round pick in 2011, who despite catching less than half of his targets gained 3591 yards over four seasons for 30 touchdowns.

Mark Clayton of course also has to be in the discussion, a first-round pick who from 2005 to 2009 caught 234 passes for 3116 yards, though he had just 12 touchdowns, and never more than five in a season.

If you continue down their all-time list, though, you see names like Brandon Stokley and Jacoby Jones pop up. They may not have been a franchise for all that long, but their history as a wide receiver factory is sorely lacking. Only 11 wide receivers in their history have gained 1000 career yards in a Baltimore uniform. The Steelers have had 15 since 1996.