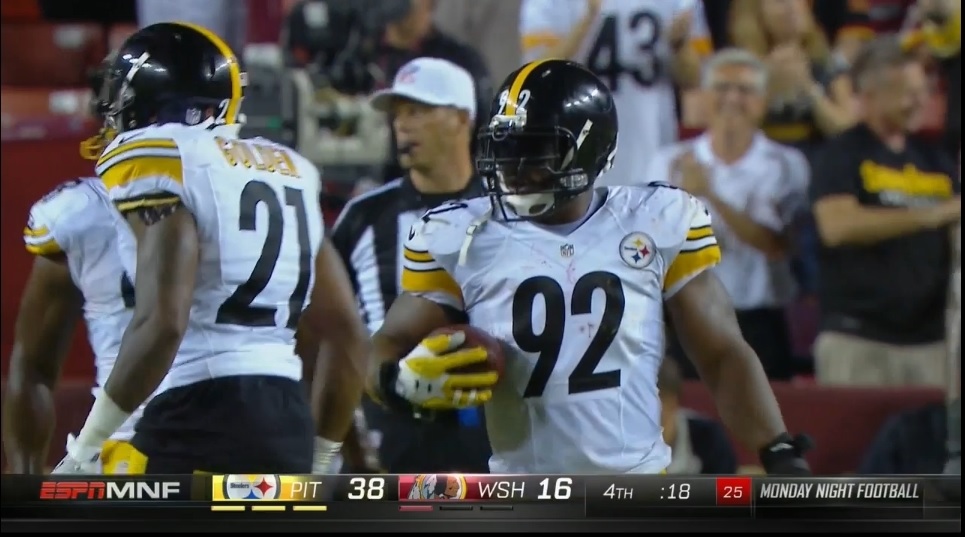 Though it can be frustrating to see James Harrison drop into coverage as much as he has, there’s justification for it. He’s really good at it. I’m not sure if we’ve talked about this before but Pro Football Focus tweeted out this graphic of Harrison being the best coverage edge rusher last season.

On passing downs, James Harrison doesn't need to be rushing the passer to get the job done. pic.twitter.com/entACb1YAt

I don’t have all the data to compare Harrison to those behind him or to his past seasons but needless to say, that’s a strong number and good place to rank. He’s always been capable dropping into coverage, the proud owner of 33 pass breakups and eight interceptions.

Of course, his most famous pick came in the 2009 Super Bowl against Arizona, undercutting a slant route to intercept Kurt Warner before huffing and puffing 100 yards into the end zone. Remember that was all Harrison’s doing. The running and the dropping.

“I actually wasn’t supposed to drop on that play; I was supposed to blitz. All night, we were a step late. We had an all-out blitz and I figured if I stepped [out] I could hold my tackle … [then] I would drop off and they would have to do a quick slant.”

He finished with one interception last year, coming on the final defensive play in the opener versus Washington. But it isn’t always interceptions or breakups that makes an outside linebacker strong in coverage. It’s about being able to get to your spot and reroute defenders, fitting them within the overall coverage. I posted this example on Twitter a few days ago.

Harrison gets ragged on for being poor in coverage but this is tremendous. Bails on snap, gets outside leverage on #2. Funnel to NCB. pic.twitter.com/jYNwMvlG1c

That’s a great job to disguise the blitz as long as possible, get to his spot, and reroute the #2 receiver inside. Funnels him to the nickel corner, William Gay. Not something many will notice but it’s a tremendous job.

A 3-4 defense is built around its unpredictability. In who is blitzing but also who is dropping. Even 39 year old outside linebackers like Harrison have to be capable of doing it to avoid a defense becoming static and predictable. Based on our charting, Harrison dropped 32.4% of the time last season, a team-high for EDGE rushers.

There were definitely times where Keith Butler dropped Harrison too often last year, the first half of the year and the AFC Title game come to mind, but you’re still going to see it happen about 25% of the time in 2016. It’s how the system will work best. And Harrison still moves nearly as well backward as he does forward.