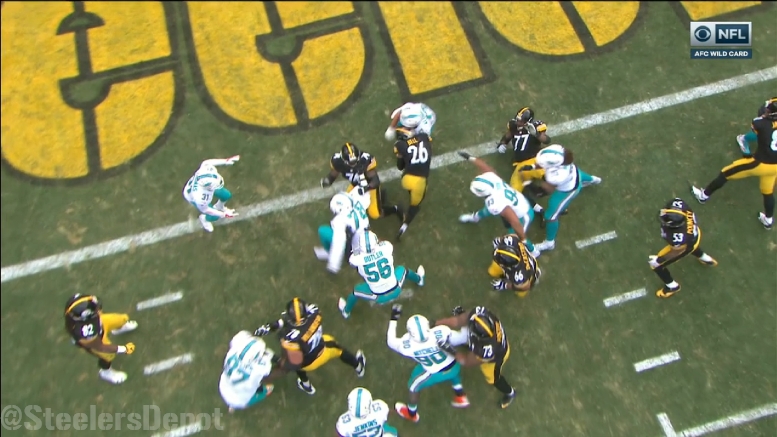 Earlier today, Alex Kozora mentioned that according to Pro Football Focus, Pittsburgh Steelers running back Le’Veon Bell was the most successful player in the league last season when it came to generating positive yards after contact in short-yardage situations. That was an interesting statistic, so I wanted to dive a little deeper into it using my charting data from last season.

Short-yardage situations as generally referred to as plays in which the offense requires three yards or fewer in order to record a first down or to score a touchdown, so that is the benchmark I assume Pro Football Focus used in their data, and which I will use as well.

By the numbers, I have Bell attempting 18 runs with one or more yards to go, and he converted 15 of them for a roughly 83 percent success rate. He gained 67 yards on those plays for an average of 3.72 yards per carry. He only lost yardage on two of them, including a three-yard loss against the Cowboys that resulted in him fumbling the ball out of bounds.

He only had 10 rushing attempts on plays in which he needed two yards. He gained 53 yards on those attempts, averaging 5.3 yards per carry. Only two came on third down, converting one of them, but gaining positive yardage on both. He converted all eight second-and-two attempts for 49 yards, including two touchdowns on second and goal from the two.

Bell also had six rushing attempts on plays in which he needed to gain three yards. He gained 20 yards on those attempts, averaging four yards per carry, but 13 of them came on one carry. He only converted on two of those six attempts, but only two were on third down, and he converted one of them.

Surprisingly, he also had three rushing attempts on third and four or more, and he gained 53 yards on these plays. He only converted two of those attempts, including a 44-yard run and a nine-yard run. He gained zero yards on the other.

Overall, what’s clear is that the Steelers remain far more likely to throw the ball than run it, even though Bell was successful. Excluding penalty plays, they attempted 115 passes on plays in which they needed three yards or fewer, but they did complete passes on 88 of them for a completion percentage of better than 76 percent. There was just one sack on such plays.

Interestingly, my data seems to show that just one of those short-yardage passes that went for a completion failed to generate a first down, so their conversion rate passing was not much worse than their completion percentage, rounding up to 76 percent. That includes 31 plays on third or fourth down.