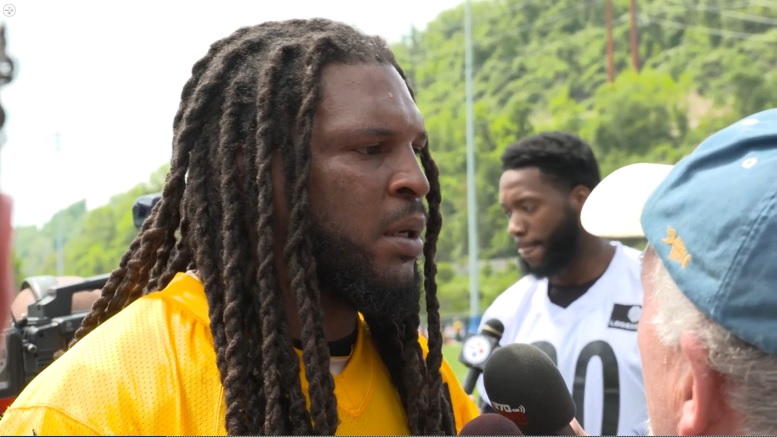 While he’s no longer a member of the Pittsburgh Steelers, it will still be interesting to tract the continuing NFL career of former first-round outside linebacker Jarvis Jones, who signed a one-year, 2.25 million incentive-laden contract this past March with the Arizona Cardinals.

Jones, who was selected 17th overall by the Steelers in the 2013 NFL Draft out of Georgia, is now hoping his change of teams helps him flourish as a defensive player after failing to live up to the expectations that came with him being a first-round draft pick during his first four years in the league with the Steelers.

“It’s a new beginning for me, it’s a fresh start,” Jones said recently of his change of teams during an interview, according to Adam Green of ArizonaSports.com. “I’m 10 toes in, man, and it’s a beautiful place here. I love the environment, the coaches and what they’ve got going on here. I’m definitely trying to jump on this train and make my mark.”

Jones failed to make much of a mark with the Steelers as the former Consensus College All-American in 2011 and 2012 only registered six sacks in the 50 total regular season games he played in during the four years he was in Pittsburgh. The writing was on the wall just over a year ago that 2016 would be Jones’ final season in Pittsburgh when the organization decided not to pick up his fifth-year option.

Even though the Steelers declined Jones’ fifth-year option, the outside linebacker still started eight of the team’s first nine regular season games in 2016 ahead of ageless veteran James Harrison on the right side of the defense. However, Jones’ inferior performance in the Steelers Week 10 home loss to the Dallas Cowboys, and specifically against the run late in that contest, wound up being the straw that broke the proverbial camel’s back and Harrison took over as the starter on the right side for the remainder of the season.

While the Steelers ultimately decided to give up on Jones after the 2016 season, his new head coach, Bruce Arians, believes the outside linebacker can still be salvaged.

“Some strength and tenacity,” Arians said recently of Jones, according to Green. “He’s got some pass rush skills, and we play our outside backers a little different than they do in Pittsburgh.

“He’s getting around the quarterback; he’s very powerful when he’s running stunts. He might not get the sack, but he’s going to cause it. I like where he’s at.”

With outside linebackers Chandler Jones and Markus Golden set to start for the Cardinals in 2017, one has to think that Jones will be relegated to part-time playing time in Arizona and because of that, Arians indicated recently that he sees the former Steeler being a major special teams contributor moving forward.

“This is a great place to be. As far as my position, they’ve got some great guys in Chandler (Jones) and Markus Golden, and I’m trying to be a part of their group and do some great things around here,” Jones reportedly said of his current spot on the Cardinals defensive depth chart.

Well over a year ago, former first round draft pick Nick Perry signed a one-year prove it deal with the Green Bay Packers after four very mediocre seasons with them to start his NFL career. That gamble paid off for both sides as Perry proceeded to register 11 sacks last season in the 14 regular season games that he played in. He also had a sack during the Packers three-game playoff run. The Packers ultimately rewarded the USC product with a five year, $60 million contract this past March.

While it’s doubtful that Jones will be able to duplicate what Perry did last season and especially if he’s not a starter with the Cardinals, it’s obvious that he’s looking forward to proving his critics wrong this upcoming season just the same.

“My career in Pittsburgh wasn’t what I expected, but like I said, it’s a fresh start for me, I’m still getting an opportunity to play football,” Jones reportedly said per Green. “I want to take full advantage of it, and what better place to do it than here?”