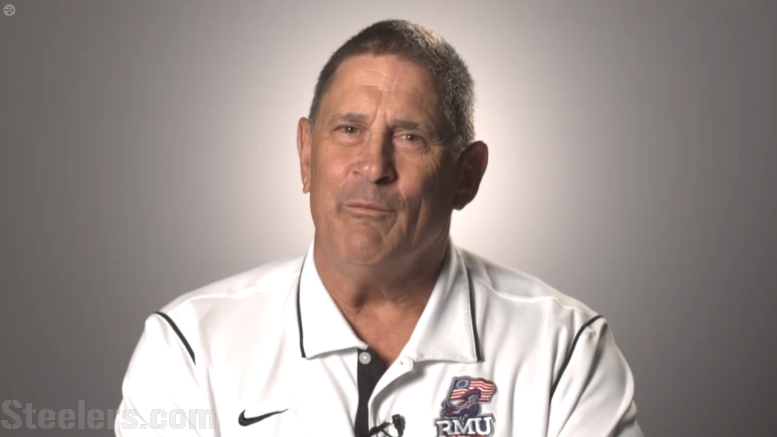 One of the great things that the Pittsburgh Steelers’ website has launched this offseason to while away the small hours between relevant football mile markers has been a new video series called Legends, in which they have interviewed several former players of some renown, including the likes of Joe Greene and Donnie Shell.

A recent interview that they posted is one with John Banaszak, who played behind the Steel Curtain defensive line from 1975 when he made the team as an undrafted free agent through 1981. He won three Super Bowls with the team—and a USFL championship after it with the Michigan Panthers.

But he has since gone into coaching, and for that he greatly credits the influence of the only head coach he had ever known in the NFL, the Hall of Famer, Chuck Noll, who was instrumental in rerouting a struggling football team into the winningest franchise since the NFL-AFL merger of the late 1960s.

“There’s no question there’s a lot of Chuck Noll in me”, Banaszak said during his interview about his coaching style. “I coach our kids the same, in the same manner. Fundamentals are very, very important. They were always stressed by Coach Noll. He was an amazing coach”.

There are many things that the titan of the team’s past is famous for saying, but perhaps one of the simplest was his ode to the fundamentals. “This game is blocking and tackling” is a quote that the late Dan Rooney remembered him for when he himself passed away in 2014.

The fundamentals are basic for a reason; that is what makes them fundamental. Mastering the simplest building blocks of the game is the cornerstone of success. Many would argue that emphasis over time has shifted away from this, to the detriment of the quality of the on-field product.

But that was never the case with Noll, nor with those who learned from him, because his lessons stuck with those he taught. Banaszak recalled an example in which the head coach suggested after observing him that he move his “right leg three more inches outside and widened [his] stance”. Doing so, he said, would allow him to get off the ball quicker. Those are the fundamentals.
“That’s the kind of coach he was”, the 59-game starter recalled of his influential leader. “He was a fundamentally sound individual, he needed his players to understand that”. It was the catalyst for all the success that they would go on to have for about a decade, creating arguably the greatest dynasty of an era.