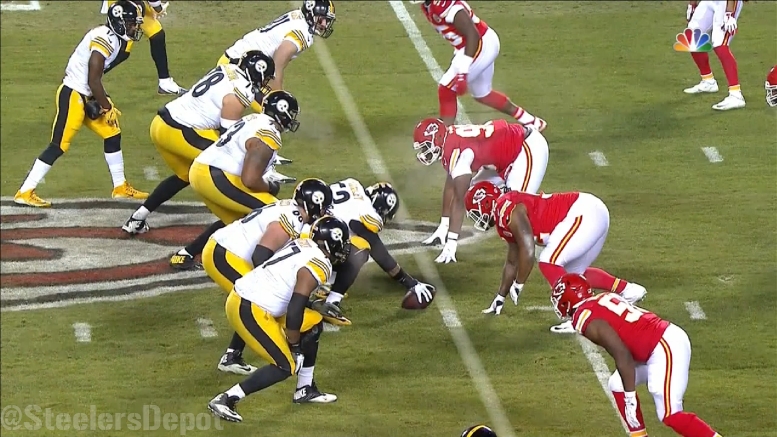 The Pittsburgh Steelers’ offensive line may have shown the most progression of any OL group in the league over the past three seasons. In 2013, Ben Roethlisberger was sacked 42 times, once every 14 attempts. Fast forward to 2016 and that number has improved drastically to once every.

It’s a figure that has dropped since 2014. Certainly not a coincidence, that’s also when Mike Munchak came on scene as the team’s offensive line coach. He deserves every ounce of credit for a litany of things with the offensive line, and offense as a whole, but I wanted to focus on one specific area today.

In 2013, the only year under Jack Bicknell Jr, I counted eight sacks stemming from stunt pickup breakdowns. I haven’t counted the number from 2016 but you can bet it’s lower. Way lower. Here’s one example from 2013, a day where Big Ben was taken down five times. On the left side, Mike Adams and Ramon Foster don’t pass the stunt off correctly and Jurrell Casey notches the sack.

(Kelvin Beachum at center too. Neat.)

In part of a 90 minute clinic Munchak recently gave, he spent some time talking about pass sets and how he helps protect guards in stunt pickup.

Against fronts with a 4i and wide rusher, usually a 3-4 defense, Munchak said he’ll have the tackle vertical set. The tackle will get depth, a four step drop that is broken into a pair of two (1-2, 1-2), get eyes on the outside rusher, and feel for any inside threat. 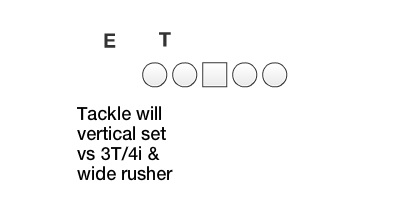 “I’m helping the guard immensely,” Munchak said. “I played guard. Believe me, there’s nothing better than that guard taking away the first move…and if it’s a stunt, it’s easy to pick up.”

There appears to be a much stronger guard/tackle relationship now than then, though I admit I don’t know exactly what Bicknell was coaching. The guard will take two square steps to the outside to combat the wide rusher. If the interior linemen spikes inside, the guard will mirror and look to wash him down, giving the tackle the freedom to be aggressive on the outside linebacker. Munchak said it was one of the few times he’d ask his guys to be aggressive – to “jump” – a defensive linemen in his scheme.

“We’re reading what’s going to happen [with the outside rush],” Munchak told the group. “We’re feeling what is happening [with the interior/head up defender]…we’re staying square. We’re coming out, 1-2, 1-2, and then something’s happened.”

Something happened means the defense has shown how they’re rushing. Who is stunting, slanting, etc.

If a stunt came, both linemen would recognize it, be on the same level, and able to pass it off. There aren’t any gaps between the two for the crasher or looper to squeeze through, like you saw in that 2013 clip.

Here’s a baseline example of the technique. No stunt here but you see left tackle Alejandro Villanueva vertical sets to the man side of the protection with an OLB and three tech to his side.

You see Villanueva take his vertical two steps, check for a stunt, and then kick to the outside linebacker and seal him upfield. You don’t get the same look to the other side because it’s the slide side. The center is there to help, three on two.

Comb through last year’s film and you’ll see examples of Munchak’s coaching and how it aided in picking up stunts.

Week 11 against Cleveland. Again, it’s Villanueva with the vertical set to the left side of your screen. The end crashes, the tackle loops, and Foster and Villanueva pass it off well. In the clinic, Munchak said most defensive lineman suck at stunting and easily tip their hand. Combine that with good coaching points from Munchak and the Steelers shut this one down.

A breakdown of it frame by frame. The front checks the tackle into his vertical set and Villanueva sees the stunt. Passes it off with Foster and all is kosher. 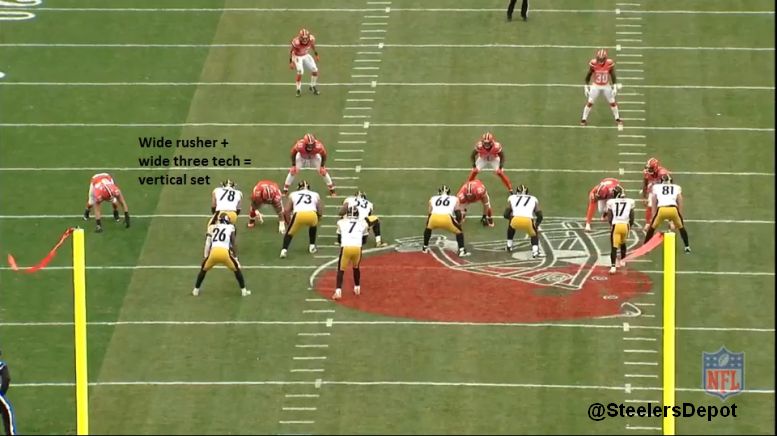 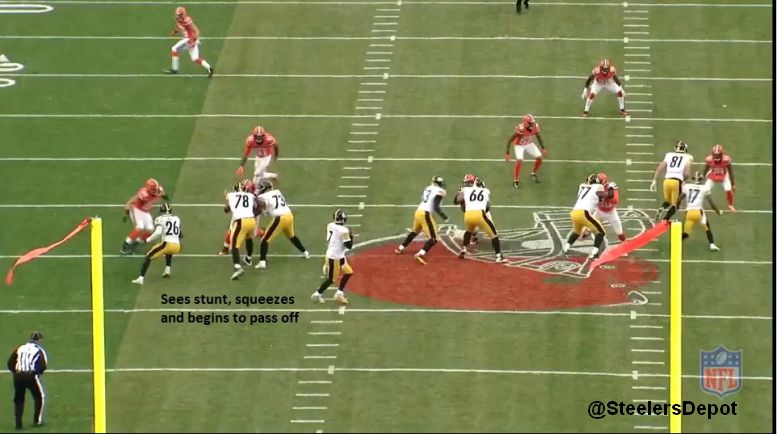 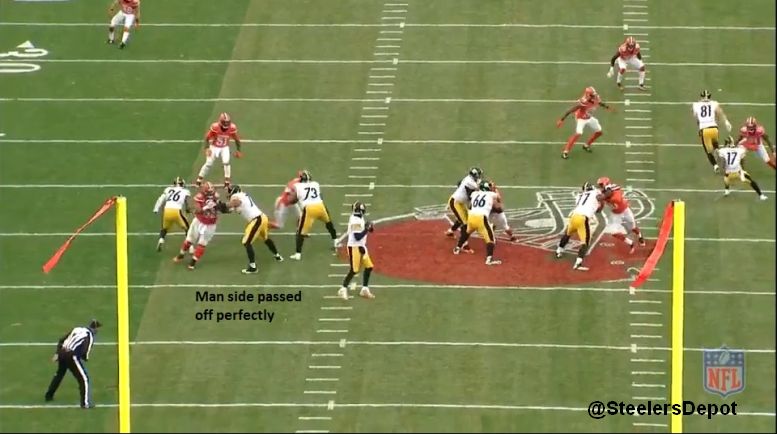 Another example three weeks later against the Buffalo Bills. There’s less of a vertical set here because the stunt happens so quickly to the left side of the OL and the Bills wind up running games to each side. And both are picked up flawlessly, despite this game being on the road, where communication can be tougher.

Another look at it in photos. 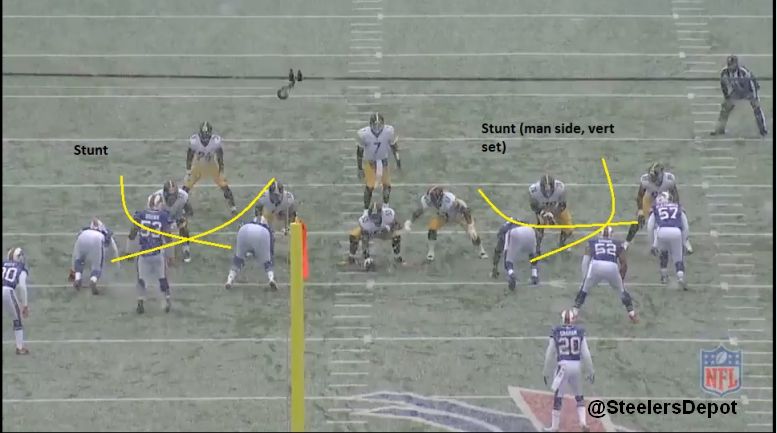 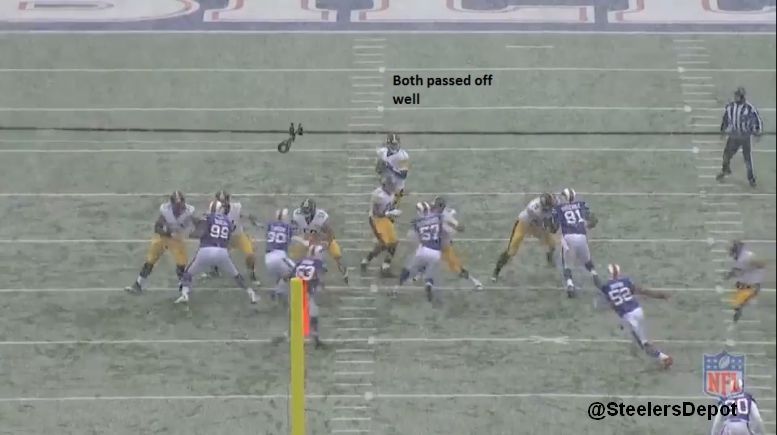 To be clear, this vertical set isn’t specifically intended to combat stunts. There are several reasons why it works. But it certainly helps in stunt pickup and overall spacing, ensuring defenders don’t have huge two-way gos to take advantage of and helping to prevent guards from being left on an island.

Munchak says it’s something he reps with his guys all the time. Something he can do during group work but also a time-killer during normally dead times of practice. 7v7, special teams. Munchak began the clinic by not buying into the common complaint that coaches don’t have enough time to work with their guys. Munchak believes in making time and taking advantage of every minute offered.

From my outside-looking-in perspective, stunt pickup is something Munchak reps heavily – daily – at training camp. The Steelers have upgraded their talent since 2013, and players have gotten better, but Munchak continues to be the catalyst.