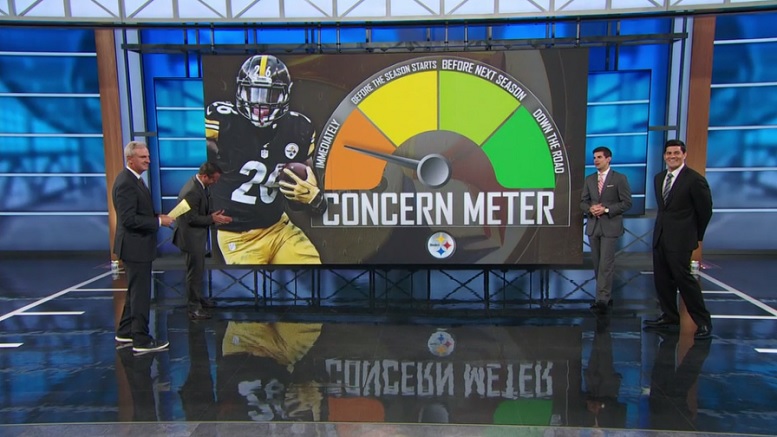 With more than a month remaining before the Pittsburgh Steelers need to have running back Le’Veon Bell signed to long-term deal after issuing him the franchise tag earlier in the offseason, there’s a lot of talk lately as to whether or not a deal will ultimately get done. During the Monday edition of ESPN NFL Live, Field Yates explained why he thinks a new deal for Bell should be listed as “Immediately” on the show’s “Concern Meter.”

After delivering his stance on Bell, fellow ESPN analysts Dan Graziano and Tedy Bruschi both rebutted and they each made it sound like the Steelers have no immediacy to sign Bell to a long-term deal at all before the July 15 deadline.

“I don’t think that it’s going to be immediate because this is a player that’s opened the season on suspension the last couple of years,” Graziano started to explain. “I don’t think that the Steelers are ready to commit long-term at that level and if you’re Le’Veon Bell, and that franchise tag is $12 million, why would you take less in a long-term deal than that tag?”

Bruschi then chimed in with his thoughts on the Bell situation and once again, he made it sound like the Steelers shouldn’t sign the running back to a long-term deal prior to the deadline.

“This is the best running back in the league, in my opinion, but I wouldn’t say immediate, either,” Bruschi explained. “It’s just that you got to know from these trainers how durable he’ll be down the road – I mean, if this a three, four, five-year contract and also, how stable is he off the field?”

Let me say that this segment on Bell was a little bit confusing and wasn’t set up that great in addition. I reached out to Graziano on Twitter and he clarified to me his stance and you can see that below. I’ll dangerously assume that Bruschi feels the same way.

No, I'm saying I don't think it's a sure thing anything gets done by deadline. Each side has reason to wait.

Yes, Bell and his agent are likely going to want to start at a little more than $12 million a season as that’s essentially what the Steelers told the running back he’s worth when they placed the franchise tag on him. If Bell decides to ultimately take less than that a season, great, however, I’m not holding my breath for that to happen.

If the Steelers fail to get a long-term extension worked out with Bell prior to the July 15 deadline, they’ll need to place the franchise tag on him again next offseason if they want to retain his services and that amount will be an increase of 20 percent over his 2017 amount. At that point, it might be even harder to get a new long-term deal done with Bell and especially if he has a great 2017 season that includes him staying healthy and out of trouble with the league.

I know a few of you reading this probably agree with Graziano and Bruschi. Personally, I think the Steelers should and ultimately will sign Bell long-term for right at about $12 million a season and especially if they can structure his contract in a way that his 2017 money is made up of a lot of first-year base salary and a roster bonus in lieu of a larger signing bonus. While such a deal likely wouldn’t create much, if any, salary cap relief in 2017, at least the Steelers would be able to considerably lower any potential future dead money past the first two or three years of the new deal by structuring it in such a manner.

I assume the longer Bell goes without a contract that several more analysts will start to wonder if a new deal will ultimately get done at all. Personally, I fully expect these contract negotiations to go on several more weeks with a new deal finally being consummated on July 14 or thereabouts.