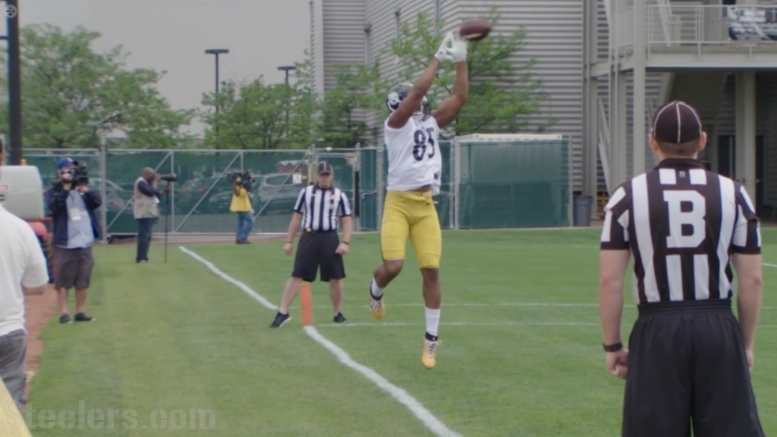 Topic: Does Xavier Grimble have a reasonable shot of becoming the Steelers’ primary tight end by the end of the season?

If you happen to follow Bob Labriola’s Asked and Answered series on the Steelers’ website, you may have caught yesterday’s edition, in which a fan asked the reporters who be believed would make the biggest impact at the tight end position behind Jesse James.

Labriola was pretty clear in stating that it was second-year Xavier Grimble, and he even went so far as to say in concluding that, “if [he] can become more consistent, starting with catching the football, maybe he makes a run at the top of the depth chart”.

This comment, on the face of it, seems absurd, given the clear disparity in production and in snap counts between the different tight ends over the course of last season. Grimble barely made the initial 53-man roster only because Ladarius Green was on the PUP List.

James was nearly an every-down player for the Steelers at multiple times last season, and we also saw clear growth from him over the course of this year. Some of his most productive games as a receiver and as a blocker came late in the year, even in the postseason.

But the notion of Grimble chipping away at James’ playing time, and perhaps even logging the lion’s share of snaps, might not be that absurd. One should consider that in the games leading up to Green’s return from the PUP list, Grimble was actually increasing his snap count significantly, and even played more than James.

Things changed up with Green back, but after the free agent suffered his concussion, Grimble suffered a rib injury on a touchdown reception on the very next drive the Steelers played, a week later, limiting his ability to contribute further.

With both players demonstrating improvement over the year, and since the season ended, one might be more inclined to question how set in stone the depth chart is, or should be. One thing is for sure, Grimble looks to be in peak physical conditioning.