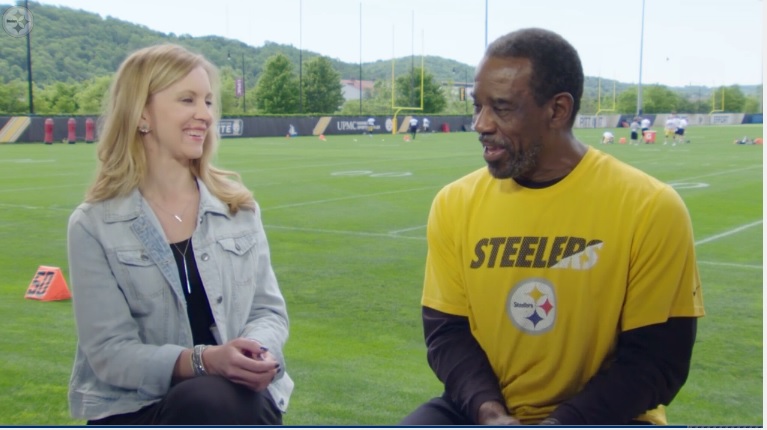 When you think of the Pittsburgh Steelers, you think about two elements: success and stability. A one family ownership. Three head coaches since 1969. And six sparkling Lombardi’s standing tall in the facility.

For the present, part of what makes this organization so strong aren’t just the big names in the coaching staff. It’s the assistants. There’s rare continuity there, names who have been on staff longer than their head coach. That tenure matches their passion, too.

Wrapping up an interview with Missi Matthews over on the team site, defensive line coach John Mitchell was asked if he was excited to get to training camp in Latrobe. His answer turned him positively giddy, with energy and excitement he might not have had since playing for Bear Bryant at Alabama.

“I love training camp,” he told Matthews. I can’t wait. I wish we could go today. When you love something that you do, it’s not a job. I look forward to going to training camp because you’re in an environment where it’s football 24/7. And that’s it. And when players realize the same thing, we’re only up there for about three weeks, 25 days, you can get so much done. You got them isolated, you got them around the clock. I love training camp.”

Maybe that’s why Mitchell keeps coming back to football and the Steelers. He hinted at retiring after the previous core group of guys left. Chiefly: Aaron Smith, Brett Keisel, and Casey Hampton. In 2009, he told The New York Times, he had maybe five years left.

“When this current group of guys with the Steelers leave, I’m going with them,” he said — and he and his wife, Joyce, plan to move back to Birmingham, where he can finally use the four Alabama game tickets he never gave up, and enjoy the results of his pioneering efforts.”

Eight years later, Mitchell is still here. A wholly new group. Cam Heyward, Stephon Tuitt, and Javon Hargrave. But Mitchell is bringing the same passion and drive to coach them up and make them current stars or budding ones.

He isn’t the only one. Mike Tomlin coaxed Richard Mann out of a brief retirement to lead the wide receivers. Mann has been coaching wide receivers two years longer than Tomlin has been alive, a thought so crazy sounding I had to triple-check it. Anyone who has played under him has gushed about what he brings to the table, helping to mold Martavis Bryant, Eli Rogers, and take Antonio Brown’s game to new heights.

Mike Munchak went back to his roots to become the Steelers’ offensive line coach after the Tennessee Titans fired him from his head coaching perch. Munchak played guard at the league’s highest level and shares his player’s perspective. There’s an element of respect the team’s previous coach didn’t have.

Listening to Munchak in a clinic he gave last month, that passion was evident. He stressed showing clips of his players using their drills in-game, in order to show – not tell – why it matters and why every practice rep needs to be taken seriously.

James Daniel probably doesn’t get the credit he deserves for helping to mold Heath Miller. After all, Daniel was the only TE coach Miller had his entire pro career. There’s Randy Fichtner, who along with Todd Haley, has helped evolve Ben Roethlisberger’s game and James Saxon, a youngster in Steelers’ tenure but not in his overall coaching resume. Throw in the young bucks of the group, Carnell Lake, Joey Porter, and Jerry Olsavaky and it’s a solid group.

Mainly, I think about the first names mentioned: Mitchell, Mann, Munchak, and Daniel. Fantastic careers; playing, coaching, or both. The Steelers are deepest at wide receiver. This group of five offensive linemen is arguably the best group the franchise has ever had. The defensive line turned over three great players in their franchise, replacing them all in short order without missing a beat.

Their stories that have been told. Mitchell in that 2009 article and Munchak’s name is mentioned time and time again when the line is referenced. But I still don’t believe they’re given the credit they deserve. Not just for their expertise but passion they bring to the table. It’s infectious and in that room, they are the building blocks.