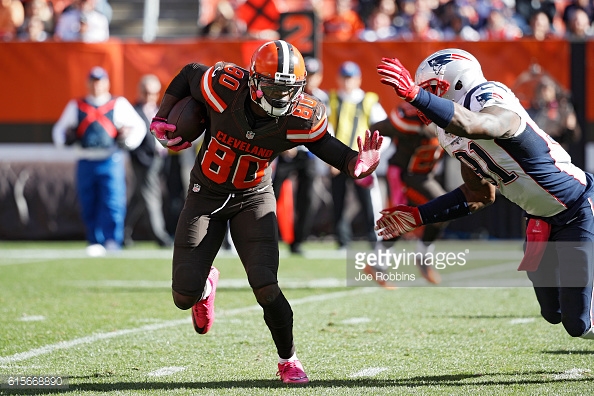 What is the first thing that comes to mind when you think about the Cleveland Browns and the ways in which they need to improve in order to field a competitive team? Did you point out their instability at the quarterback position as they attempt to wade through three different options?

If so, then you’ve hit on the obvious. But if there were a second-most important goal to reach that will help the Browns lead to a better team, it would be to build up their wide receivers, a group on the roster that seems primarily to be made up of second-year players.

Cleveland stocked up at the position during last year’s draft, but beyond first-round pick Corey Coleman, none of the other wide receivers were drafted higher than the fourth round. Ricardo Louis was one of those players, but he was not a significant contributor last year.

This year? Especially with the departure of Terrelle Pryor, who signed with Washington after a bit of a breakout season with marginal quarterback play behind a poor offensive line, the Browns are counting on it. Though they replaced Pryor with Kenny Britt, the reality is that they still need even more help beyond that.

During the 2016 season, Louis was active for all 16 games, but he only caught 18 passes for 205 yards without scoring, though he did manage to fumble once, with the ball not changing possession. He caught two passes against the Steelers in the regular season finale for 22 yards.

Now in his second year, his coaches are talking about him as though he’s a different player. No matter who he is, however, they need him to produce differently.

Wide receivers coach Al Saunders told Pat McManamon of ESPN that Louis is “a different guy” this year as he looks back upon last year during OTAs and training camp. Head Coach Hue Jackson also noted through OTAs that “he has really improved”.

For his part, the wide receiver is expecting the same thing of himself that his coaches are, and he believes that he is starting to figure it all out after getting over the learning curve that comes with the transition from the college game to the pros.

“There’s a lot of things that you have to be very specific on when it comes to being in the NFL”, he told McManamon. “You have to be detailed with everything you do as far as preparation and taking the next step”.

He went on to say that he is more comfortable with virtually every aspect of the game this time around, from running routes to creating separation. “I have definitely taken a step forward”, he added.

The Auburn product might be expected to see time on the outside with Coleman in the slot if he does emerge this season. At 6’2” and 215 pounds, he is four inches and 30 pounds bigger than his draft classmate.